Showing remarkable calm and a constant smile, Eric Abidal appeared on the Barēa TV programme ‘El Marcador’ to explain how he got through the last few months with his illness. Abidal explained the experience has “changed my character”.

In a wide ranging interview, Eric Abidal also explained the sensations he’d felt upon returning to the game and his desire to settle down in Catalonia. The French defender has had the misfortune to miss the three big finals Guardiola’s team have played in and when it was put to him that Wembley should be his chance, he responded: “if I don’t play, there’s no problem – but whatever happens, we have to win. There are two weeks to go and I’m fortunate that the trainers know me well and they know how to get me back to full fitness for that game”.

How did you deal with your illness? 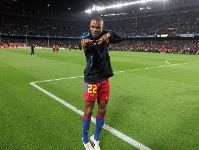 “We are lucky enough to be able to visit a hospital every year to visit ill children and support them and encourage them to fight and stay positive. That was something that I had very much in mind during my illness. That’s why the day after I was told I had a tumour, I went to the Ciutat Esportiva and told the rest of the squad that they had an important game coming up against Getafe and that they shouldn’t worry about me – the doctors would cut me open and take out a piece of my liver and that was all there was to it. I think that maybe helped the team, because they went out and won the game”, Abidal commented with a big, honest smile on his face.

Abidal hasn’t let his illness stop him from being the happy, joking character he has always been, but he explained: “when something like this happens to you, your life can change from one moment to another. It’s changed my character. I’m continuing to have tests, because this time it was my liver, but this can affect you anywhere. I want to have test every month - that’s how I was lucky enough to have them detect the tumour in my liver so soon”. 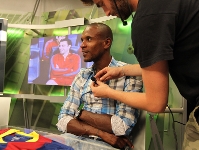 Once he was diagnosed, Abidal watched the first Barēa game on the internet and he well remembers the fans spontaneous applause on 22 minutes: “I felt that I had the fans behind me and every time I felt that applause –even when I was sat in the stands –it gave me more strength to come back”

Abidal is very grateful for all the fans’ messages he received by mail, email and even Twitter, though he explained: “I don’t use Twitter much – computers aren’t my strong point - but the people here at the club passed on the messages and I’m very grateful for them all”.

Aim to finish career at Barēa 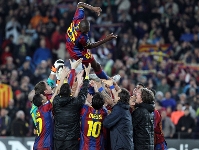 Abidal spoke to the fans in Catalan during the celebrations last Friday and he is taking Catalan classes, determined to integrate himself into Catalan life: “I want to play a full part in the community, because I would like to settle down here”.

The Frenchman is also hoping to finish off his career at the Club and renew his contract soon: “the President and everybody know that my contract finishes in a year. I’m calm about it and I’m not in any rush - I’m sure we’ll sign a new contract - if they still want me here of course!”