Captains Carles Puyol and Xavi Hernįndez lifted the Club’s 21st league trophy high into the Camp Nou night on Sunday. Before the game, the Deportivo players also applauded the new champions onto the pitch. 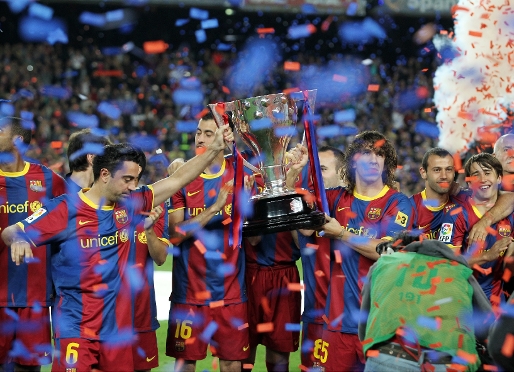 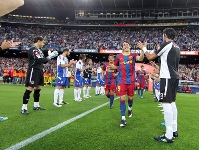 Before the game, the Deportivo players applauded the Barēa team onto the pitch with a guard of honour and they were joined by the Camp Nou crowd who cheered their championship winning team out for the final home game of this season.

Once the game had finished, the whole squad assembled out on the pitch as Carles Puyol received the trophy, together with Xavi Hernandez and the two then carried the silverware over to their teammates for the traditional group photo.

The team then made their lap of honour, this time also as part of the Nike campaign ‘Els valor de tenir valors’. 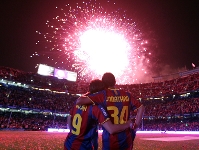 The festivities finished with a fantastic firework display and then an improvised “Sardana” from the squad with the Trophy in the middle of the dance before they left the pitch after making a tribute to the backroom staff”.

Before the game, the Barēa Borges handball team also came out onto the pitch to present their own league title to the fans, which they won at the weekend and there was also a minute’s silence observed for the victims of the earthquake in Llorca. Both Club President Sandro Rosell and coach Pep Guardiola have been giving support to the victims of the disaster and the open top bus the team travelled in last Friday also had a banner reading: “Llorca in our hearts”.