The Stadium celebrated the Club’s latest League title with a spectacular party on Friday night in which the players and their families took centre stage, insisting that they would be back to celebrate the Champions League on May 29th.

More info
At 21.10 Carles Puyol and Xavi Hernŕndez came out onto the Nou Camp pitch carrying a Catalan flag between them and the party began. All the stadium lights went out and the players and staff were introduced one by one, beginning with Thiago(30) and finishing with Valdes(1). 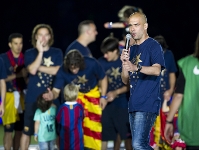 The fans gave an especially warm welcome to Guardiola, Messi and Abidal, whilst captain Carles Puyol was the first to speak, proclaiming: “thank you for coming here. We want to thank you for your support throughout the season. We have one big effort to make and don’t doubt for a minute that we will do everything we can to be back here on 29th to celebrate the Champions League. Now just enjoy this title –we really deserve it. We’ve been attacked from all over the place and they continue to do so, but we just do our job – playing football, which is what we know how to do. Visca el Barça i Visca Catalunya!”.

Guardiola then spoke and as his players held him on their shoulders he told the fans: “I want to thank you for all your support this year, then give my eternal thanks to the players -thanks boys, I really admire you. Finally a big support for the people from Lorca – keep your chins up”. 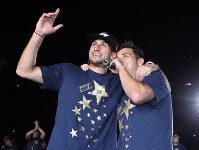 The whole squad, who were accompanied by their families, took to the microphone and the majority spoke some Catalan –including David Villa who showed his singing talents. The party finished with a lap of honour, the Club song with the players joining in, and a big firework display.