The world has found room for Barcelona on their front pages and news websites are also describing their impressive feat. 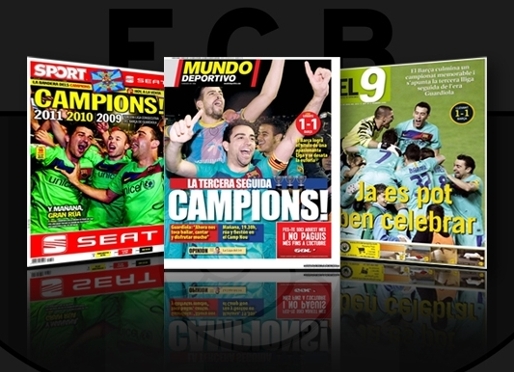 More info
Barēa’s victory was particularly prominent in Argentina. ‘Olé’ , ‘Clarķn’ and ‘La Nación’ show Barēa and Leo Messi on their covers. “Barēa, who did you beat?”, asks ‘Olé’ and the inside pages discuss whether this might be the greatest team in football history.

Back in Europe, Portuguese paper ‘A Bola’ speaks in its online version about a “Draw with a title taste”. In France, ‘L’Equipe’ tells how Barcelona fought to the end for the championship . In Italy, ‘La Gazzetta dello Sport’ stresses that this was the “Third title in a row” and in England ‘The Guardian’ points out that Barēa can now fully focus on the Champions League final.

In Spain, Barēa’s victory appears on the front pages along with news of the tragedy in Lorca caused by an earthquake. “Third league for prodigal Barēa”, says ‘La Vanguardia’, while ‘El Paķs’ runs with “Barēa conquer 21st league title”. The Catalan sports dailies focus on the third title in a row and the celebrations that followed.