Josep Guardiola was clearly thrilled at his team’s third La Liga title and told reporters after the game: “It’s a very important title to win and we deserve to celebrate it - now it’s time to party, because that’s what winning this title deserves”. 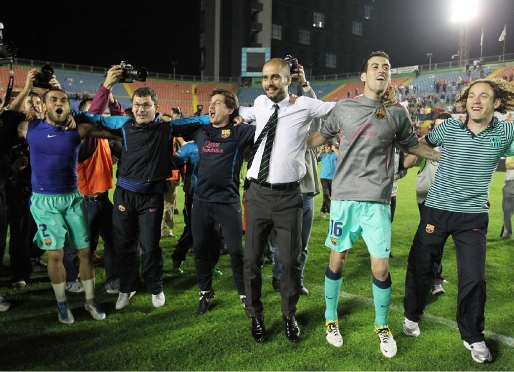 Assistant coach Tito Vilanova echoed Guardiola insisting: ”we all have to celebrate winning this trophy in style. This year we can celebrate, whereas last year the players all had to rush off to play for their national teams”.

Vilanova went on: “it’s been a very complicated year. Now we are all very happy. We needed a point and it was important to get it as soon as possible. Now we have more time to prepare for the Champions League final”. The coach also referred to the worries about the returning World Cup players as the start of the season: “it was an unknown factor just how they would be after the World Cup. What’s more, Madrid had strengthened their squad and the pressure from that quarter was really strong”.

This is Barcelona’s third league title since Guardiola took over and the boss was happy to proclaim: “now we just want to enjoy it, eat and drink a lot –dance a lot, sing a lot –do a lot of everything- Now is the time to party, that’s what winning this title deserves and we have time to get ready for the final in London”.

Guardiola went on to stress the “superiority and solidity” his team have shown over recent years in La Liga and the importance of: “savouring this title with our friends and families. These are things that you never forget. I also hope people have enjoyed watching us play –that would really be the best reward. The fact is we are the league champions and that’s because we deserve it. Once again this year we did an excellent job”.

Praise for the players 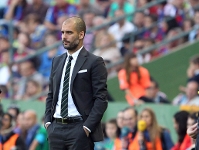 n typically modest style, Guardiola insisted: “I’d dedicate this to the squad. We’ve done things really well and that is all down to the players and the effort they’ve made. They are unique and the job of the Club will be to find players to take their place. They are an enormously strong bunch of players”.

Guardiola also stressed the importance of winning the title: “with two games to spare” and ”against such a tough rival as Real Madrid”, as well as adding, whilst comparing this season’s victory with previous years’: “you can never tell how players will react after a World Cup, but I think we gave everybody a lesson in the season after we needed 99 points to take the title”.

“Every year has taken a mighty effort”

Reflecting on the season as a whole, Guardiola reckoned: “the players have put in three quarters of the season at a sensational level. It’s true that we haven’t been quite so sparkling towards the end, but we have always stayed competitive. There are things to improve, but you have to remember the incredible schedule these players have had to put up with for the last two and a half years and we’ve also suffered with injuries and illnesses. Every year has taken a mighty effort and that’s what we have learnt”.