Six Leagues away from Camp Nou

Barça have won six leagues on the road

If Barça win the league title tonight, it will not be the first time they have won away from the Camp Nou. They first won on the road in 1928/29 at Arenas de Getxo, and the last time was 2004/05 also at Levante. 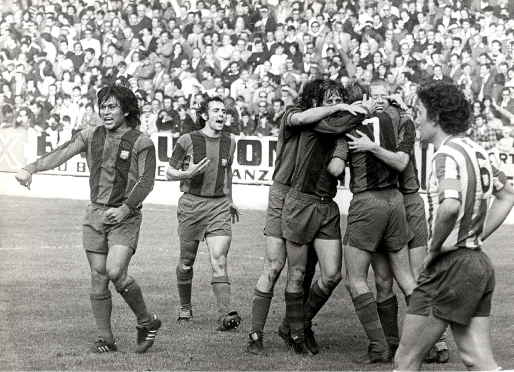 Half time champions in Vigo

The 2005/06 championship deserves a special mention. Barça were at Celta Vigo, and kicked off an hour after their title challengers Valencia started their game in Mallorca. At half time at Balaídos news came through to Frank Rijkaard that Valencia had lost 2-1, and so Barcelona were already champions. But they still had 45 minutes of football ahead of them, and Eto’o sealed victory. Barcelona ended 12 points ahead of second placed Madrid.
So this could be the seventh time FC Barcelona have secured the league away from home. The Ciutat de Valčncia also brings back fond memories, as it was here that the first Liga of the Rijkaard era was won.

On June 30, 1929, Barça won the first ever league championship by winning the final game at Arenas de Getxo with two goals from Parera (0-2). It wasn’t the last match of the season, as they still had one postponed fixture to play, but it was enough to win the title ahead of second placed Real Madrid.

On April 12, 1959, Barça under manager Helenio Herrera won the 1958/59 title on the penultimate day thanks to a draw away to Atletico Madrid, the only goal scored by Segarra. This was a record breaking season, with 24 wins, three draws and two defeats, 96 goals for and just 26 against. Real Madrid finished four points adrift.

In 1973/74, with Dutch star Johan Cruyff in the side, FCB mathematically secured the trophy on April 7, 1974 by winning at Sporting Gijón 4-2 with goals from Marcial (3) and Rexach (1). FC Barcelona had five games in hand in a season that will always be remembered for the 5-0 win at Madrid and in which they ran away with the title, eventually finishing eight points clear of second placed Atletico Madrid. 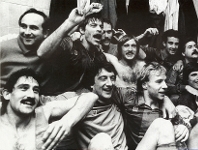 ‘Urruti, I love you’

On March 24, 1985, Barça won their tenth league at Valladolid. The manager then was Terry Venables and they won with four games to go. The 2-1 win over Valladolid came thanks to goals from Clos and Alexanko, although the game will always be remembered for the way Joaquim Maria Puyal yelled ‘Urruti, I love you!’ after he saved a late penalty. Barça finished ten points clear of second placed Atletico Madrid.

On May 22, 1999, Barça won their seventeenth league in Vitoria after beating Alavés 4-1 (goals from Cocu, Kluivert, Figo and Luis Enrique). This was the second title in a row and came three days from the end under guidance of Louis van Gaal. Barça finished on 79 points, a massive eleven more than second placed Madrid. 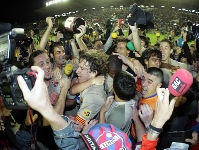 Barça could celebrate the title tonight at the Ciutat de Valčncia, but it won’t be for the first time. They did the same on May 14, 2007 when Frank Rijkaard was coach and a draw with Levante thanks to an Eto’o equaliser put an end to a title drought dating back to 1999. With Ronaldinho dazzling, FCB ended with 84 points, and Madrid were second with 80.