With no time for rest, Barça got back to training on Monday to prepare for the game with Levante. After the session, Bojan and Maxwell were both given the medical all-clear. 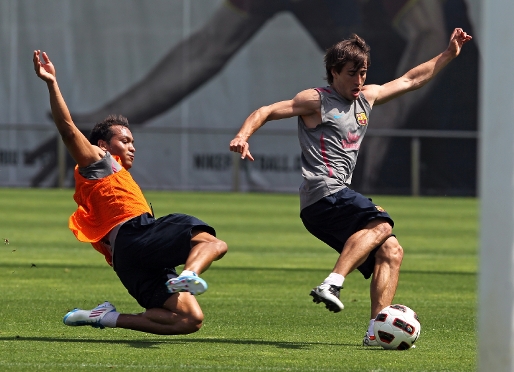 The squad will next be gathering for training at 11.00 on Tuesday morning, once again at the Ciutat Esportiva Joan Gamper. Afterwards, Josep Guardiola will be speaking to the press ahead of the league fixture with Levante on Wednesday evening.
After beating Espanyol 2-0 on Sunday at the Camp Nou to move to within a point of the Liga title, Barça trained on Monday with the Levante fixture on Wednesday on their minds. As Guardiola said in his press conference, the third league championship in a row is in their own hands. Not surprisingly then, the atmosphere at training today was particularly jovial.

Bojan Krkic, who has been training normally for the last few days, was given medical clearance today after damaging cruciate ligaments in his left knee in the Almeria match at the Camp Nou on April 9. Since then, he has been receiving treatment.

But that was not the only good news at the Ciutat Esportiva Joan Gamper today. It was also announced that Maxwell, who suffered a hernia in the Osasuna game on April 23, is also back to full fitness and is available for selection. 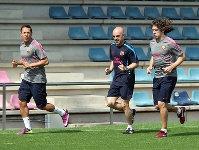 As usual on the day after matches, the first eleven against Espanyol only did gentle warm-down exercises. As on other days this week, Puyol and Adriano worked separately from the main group with fitness coaches.