“For the first time, it’s in our own hands”

Guardiola: “for the first time, it’s in our own hands now”

The win over Espanyol leaves Barça just a point away from taking the title and Pep Guardiola admitted that “for the first time, it’s in our own hands now”. 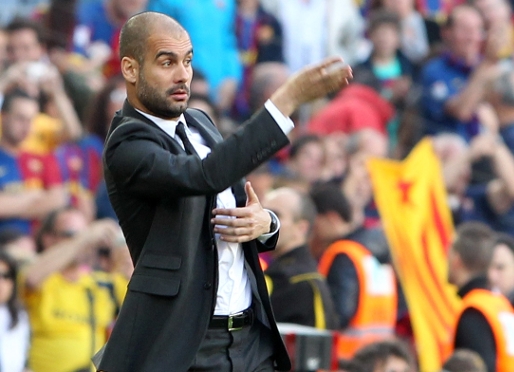 Club Vice President Josep Maria Bartomeu was also very satisfied with the win: “the team did their job and we continue to be eight points in front. We are getting ever closer to what we want, we are nearly there”. Looking to the midweek fixtures when Madrid face Getafe at home on Tuesday and Barça travel to Llevant on Wednesday, Sr Bartomeu explained: “Madrid have what looks to be an easy game, but we just have to focus on our own performance and beat Llevant to take the title, which was our main objective at the start of the season”.

Bartomeu echoed Guardiola’s desire to win the title at the first possible opportunity: “once we have the league, we can begin to prepare for the Champions League with less stress”.

Finally the Vice President expressed his condolences for the death of Severiano Ballesteros: “he was a golfing genius and a well known Barça fan”, as well as congratulating the Futsal team for their Copa del Rei title- “a historic event”- and the Youth A team for winning the Champions Cup, another success for the Club’s academy system.
Speaking in his post match press conference, Pep explained: “for the first time, it’s in our own hands now. We just need a point and we have to go for that on Wednesday at Llevant. We will all be travelling there with the idea of winning the league that day. It’ll all depend on how we play and what our attitude is. In sport, you have to take your chances when they come along”. The boss is also convinced that Madrid will keep up the pressure and win against Getafe on Tuesday: “we’ve seen how they are playing and they’ve only had two little slip ups at home”.

Ever cautious, Guardiola insisted: “we’ve not won it yet. Now we have to take the point we need” and also made it clear that he wouldn’t be resting any players for Wednesday’s match. The boss also believes: “getting more than 90 points in a season again is incredible, That only means anything if we win the league though. We need one from nine and we have to go out and take it”.

“I want it as soon as possible”

With one eye on the chance of starting work on the preparations for Wembley, Guardiola went on: “we are close to taking our third successive league title…I want it as soon as possible because these players have been working at a punishing rhythm”, going on to thank his players: “after a very hard and tiring April schedule”.

Turning to the Espanyol game, Guardiola reckoned: “it was less intense than derbies of recent years. We put in an excellent first half, though we dropped in intensity a bit after the second goal. I’d like to congratulate Espanyol for the way they behaved. They are naturally a very intense team. We played fast and simple and in footballing terms it was a very serious game”.

Guardiola was also full of praise for his Argentinean star: “the first half was fantastically good, one of the best performances I’ve seen from him this season, particularly in terms of his intensity and coming back to help with the pressing. What’s more he was as decisive as ever when he had the ball at his feet. He’s a very intuitive player. He knows himself what he has to do”. Fontas also received praise, with Guardiola claiming: “he played an admirable game in a position that he’s never played in before”.