Football is generous to those who love it. And Barēa love it. Pep Guardiola and his side are off to Wembley after staying faithful to their style to overcome Real Madrid and Mourinho.

More info
Football was the winner, and Barēa are going back to Wembley, like they did 19 years ago. They go with the same essence, the same respect for football, the same desire to entertain and the same hunger to demonstrate how much they love the beautiful game. The aim is to bring back the Champions League trophy for the fourth time, and at the same place that they won the first.

In the most high-profile semi final in history, Barēa played the football and Barēa scored the goals (3-1). Barēa do their talking on the pitch. It was football that gave its verdict tonight, and after it turned its back on Barēa a year ago in the semi final with Inter, Barēa got what they deserved this evening. But this year Barcelona were playing with the first leg result in their favour, and they played the favourites role to perfection. Staying loyal to their style (10 fouls compared to Madrid’s 31, and 64% of the possession), Guardiola’s side demonstrated that a style that they have been consolidating for years has reached its full maturity on the European stage. 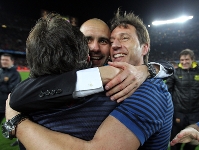 Qualification for Wembley 2011 is part of the virtuous circle that has formed the contemporary history of the club. Pep Guardiola, one of Johan Cruyff’s prize pupils, was the playmaker in that majestic Dream Team, and he has taken that famous style even further to convert it in the Barēa identity. All it takes is a look at the list of players named for today’s game. No fewer than 14 of the 20 were products of the club’s own youth system. And to top it off, they have one of the finest players to ever grace the game leading the show, Leo Messi, who in these two matches has once again shown that right now there is nobody that can touch him when it comes to talent and humility.

The Barēa legacy has unquestionably grown over the last two decades. 3 Champions Leagues, 10 Ligas (and another within touching distance), 3 Cups, 1 Clubs World Cup, 1 Cup Winner Cup, 8 Spanish and 3 European Supercups are testimony of that.

FC Barcelona are once again on the way to the final of Europe’s premier club competition. And that’s not an easy thing to do. Since 1955, when the European Cup was first staged, Barēa have appeared in six finals. So this is clearly a moment to celebrate. For the seventh time we are on our way to the final we all crave so much. And for Barcelona, this is the third time that’s happened in just six years.

The new Wembley will bear witness to how much better FC Barcelona are now than ever. Under Guardiola, Barēa have won 18 out of 20 two-legged ties and 6 out of 7 finals. Now they are ready for another challenge. The Champions League final. Now is the time to settle an account Guardiola has had outstanding since the end of last season. “They owe us one” he said. And now he is just one step away from getting just what he said he would.