Record number of away goals

Thiago’s goal at Anoeta was Barça’s 45th away strike of the season, beating their record 44 set in the 2008/09 season. Below are some of the other stats from the game. 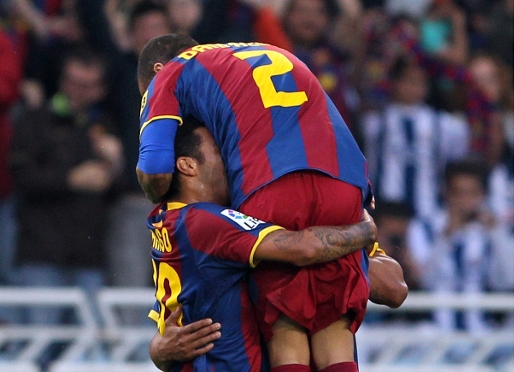 ► The defeat means that the team were unable to match Real Sociedad’s own record of 32 consecutive wins in the league, set in 1979/80.

► It has been 231 days –since September 11th, that Barça last lost a league game.

► Thiago scored his fourth goal for the first team –his third this season. The first two both came from headers.

► Fontŕs played his second league game this season, the first one being in the 0-8 win over Almeria.

► In his first start for the first team (he played a few minutes at the end of the game against Mallorca), Montoya was unlucky enough to get injured on 13 minutes.

► Jeffren, however, finished his first game of the season on Saturday night.

► Alves, who started on the bench and came on for Montoya, made his 150th appearance for the Club.

► Carles Puyol is the only player in the squad who has not been in the team for any of the six defeats suffered this season.