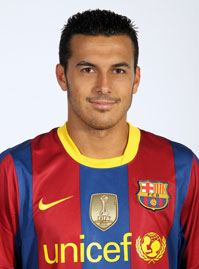 On August 20, 2009 Pedro signed a contract as a first team player after being one of the highest scorers in the preseason matches. In 2009, Pedro Rodríguez scored in the Spanish League and Cup, the Champions League , both the European and Spanish Super Cups and the World Club Cup – the first player in the world to achieve this. Without a doubt the grand revelation of the 2009-10 season. He scored 10 goals in the league of the 99 points.

In 2010/11 he stayed as strong, making 53 appearances, one more than 2009/10, and scored 22 goals, one fewer than the previous year, one of which was the opener at Wembley. In the 2010/11 season he scored in six consecutive games, something only Escolŕ, Quini and Stoichkov had done before him.

His extraordinary performances at club level took him to the Spanish squad for the 2010 World Cup finals in South Africa. He made the starting line-up in the semi-final and final and became a key figure in Spain’s eventual victory.