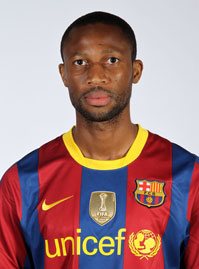 Completely adapted to the Barēa style of play, Seydou Keita became a fixture in the Barēa midfield in the 2009-10 season. After a spectacular start to the season, including a hat trick against Zaragoza, Keita kept his place in the team and even figured as a left winger. The same happened in 2010/11, where although he started fewer games, Keita became the regular twelfth man in Guardiola’s plans. Nobody appeared in as many games, 56, as the Malian in 2010/11.