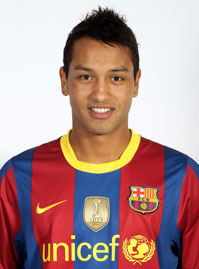 The striker, born in Venezuela, joined the Barça youth set-up in 2004. From Juvenil B to the first team, Jeffren has come up through the ranks to the point that Guardiola has handed him a regular first team place.

He was just a year old when his family left Venezuela for Tenerife. Jeffren was a prodigious and skilful footballer from a very young age.

The Barça talent scouts spotted him and from the 2004/05 he had left CD Tenerife and was among the Catalan club’s youth teams. His first coach at FCB was Guillermo Hoyos, who played him in midfield, but as the years went by it became clear that he was better used out on the wings.

He coincided with Guardiola in the 2007/08 season at Barça B and played a major role in the promotion gained to Division 2B. He made his official first team debut under Rijkaard against Badalona in the Copa del Rey in the 2006/07 season.

His league debut came at the end of the 2008/09 season away to Mallorca. The Venezuelan of Canary origin has also played internationally for Spain at youth level.

Jeffren made the breakthrough to the first team squad in the 2009-10 season. Guardiola used him as a super sub in attack and occasionally as right back. After a great performance in the final of the World Club Cup, he ended the season with 12 league matches under his belt and 2 goals.

Jeffren will never forget the 2010/11 season, when he scored the last of the historic five goals against Madrid at the Camp Nou. That was his only goal in an injury-plagued season.

On the 10th of February he extended his contract with FC Barcelona until 2012.

A left footer but who can also play with his right, Jeffren Suárez is a winger than can unsettle defenders with his combination of speed and skill. He has an excellent cross and generally scored plenty of goals a season.