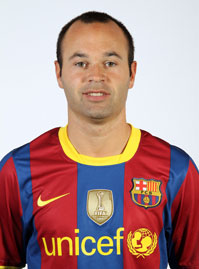 Injury affected his contribution in the 2009-10 season when he was already one of the leading players in the team. He played 29 matches in the league, 9 in the Champions League and 3 in the Cup. In the 2010/11 season, Iniesta was back to his best and in an injury free season he helped the team to another Liga and another Champions League. He played 50 matches, his second highest total as an FCB player.

Plus Andrés Iniesta is one of the key players in the Spanish national side, playing in the 2006 and 2010 World Cup and Euro 2008, when he was one of the players most used by Luis Aragonés as Spain lifted the trophy.

Without a doubt Iniesta will never forget 11th July 2010 and his winning goal in the dying minutes of extra time in the World Cup final against Holland. Despite his youth, Iniesta has now won every title the game offers.