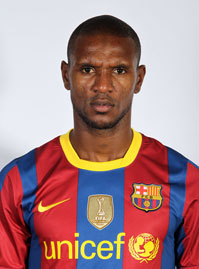 Eric Abidal joined Barça in the 2007/08 season to replace Dutch international Giovanni van Bronckhorst. This was his first taste of domestic football away from France.

Born in Lyon (11-9-1979) in the heart of an immigrant family, Abidal started his footballing career with Lyon-la-Duchčre in the French CFA 2 Division, where he played as a left sided midfielder. In the summer of 2000, he signed a professional deal with Monaco, making his debut in Ligue 1 on 16th September 2000 against Toulouse. In his first season he alternated appearances with the reserves and the first team, with whom he appeared in 8 league matches and once in the Champions League. In the 2001/02 season, Abidal made a further 14 appearances in the Monaco defence, either at full back or using his strength as a centre back.

At the end of the season, Abidal asked to go out on loan to get some more first team football. He moved to Lille, managed by the man who gave him his Ligue 1 debut with Monaco, Claude Puel. He spent 2 seasons there and gained a reputation as one of the best defenders in the country.

In the summer of 2004, he returned to his hometown when he was signed by the league champions of the previous three seasons, Olympique Lyon. He earned a place in the starting line-up from the very beginning and made his international debut for ‘Les Bleus’ on August 18th 2004 against Bosnia.

Abidal helped Lyon win three league titles and three more Super Cups, forming part of a team that enthralled the whole of Europe with their great football. In the 2006 World Cup in Germany, he played six of France’s seven games and won a runners-up medal, after which he had a great season with Lyon for the third consecutive year, with 31 starts in Ligue 1. He also figured in seven Champions League matches in the starting line-up and played 10 times for France in the 2006-07 season.

Eric Abidal joined FC Barcelona in the summer of 2007. The Frenchman played 30 League games, 10 in the Champions League and 6 in the Cup, sharing left-back duties with Sylvinho, although on more than one occasion Frank Rijkaard used him as a central defender. At the end of the season he played for France in Euro 2008 in Austria and Switzerland.

In the 2008/09 season he won the treble with Barça, but it was also a year of misfortune for Abidal. First he was injured against Espanyol and missed eight weeks of football, and on his return he was sent off in the semi finals of both the Champions League and Spanish Cup and so was suspended for both finals in Rome and Valencia. He played 31 games in all three competitions.

In the 2009-10 season he reached a peak of form, made some great goal assists but was once again plagued by injury. He played 17 games in the league and 8 in the Champions League.

The 2010/11 season was the hardest of all for Éric Abidal, when he was found to have a liver tumour in March. But showing an amazing fighting spirit, he would be back playing just six weeks later, in the 1-1 draw with Madrid in the Champions League semi final second leg. Abidal started the Wembley final on the left after missing the Rome final though suspension, and captain Puyol left it to him to lift the trophy after they had beaten Manchester United 3-1. That game in London was also his 150th for the club.

Eric Abidal is a natural left back, although given his size (186 cm, 75 kg) he can easily slot in at centre back. He likes to make runs up the wing as far as the opposing area and supply crosses to the forwards. He is a very skilful and tactically aware player, and is noted for his ability to position himself well on the pitch. He is a powerful defender who has no difficulty in running up and down the length of the pitch for the full 90 minutes.