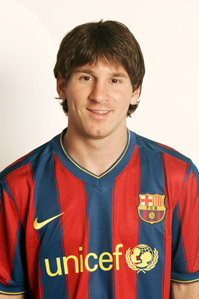 Leo Messi is the best player in the world. Lethal in the one on one, this modest Argentinian has speed, dribbling and shooting skills. But despite so many individual virtues, he is also a remarkable team player.

Messi also consolidated his place in the national side, now having played at a World Cup (2006) and Copa America (2007) for Argentina. In 2008 he also went to the Olympic Games in Beijing, where his country won gold.