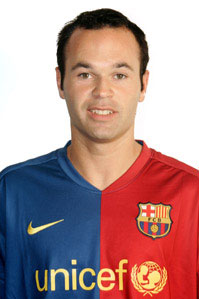 But he really established himself as a first team player in the 2005-06 season. Playing in central midfield in place of Xavi, who was sidelined for a long time with injury, Iniesta became one of the key players in the Barça side that won the League and the Champions League. He played in 33 League fixtures and 11 in the Champions League.

Iniesta is fast, direct and reads the game superbly. He started playing in Barca B in a holding role in midfield but has gradually adopted a more attacking position in his first team appearances. Van Gaal began to use him in the hole behind the striker and Frank Rijkaard has, on occasions, given him a wider role on the right.

This demonstrates what is perhaps Iniesta's greatest strength his versatility and professional attitude towards whatever job the coach hands him. Andres is not a showy player, an attribute that matches his off the field persona, but gives a guarantee of practicality and elegance.