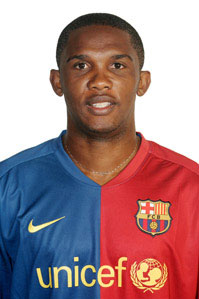 Samuel Eto'o Fils made an impact on the world of football while still a teenager. He has exceptional physical qualities and made the leap to European football at the tender age of just 16 when Real Madrid signed him up and loaned him out to Leganés.

At the age of 17 years and 3 months he became the youngest player at the 1998 World Cup in France and was the only player who had been born in the '80's.

After Leganés, he went on loan to RCD Espanyol (1998-1999) but played very little and subsequently retuned to Real Madrid (1999-2000). In the 1999-00 season, he played a few times for RCD Mallorca, eventually spending four seasons there (2000-04), with the Balearic Island club sharing his rights with Real Madrid.

During his time with Mallorca, he became the highest ever league goal scorer in the history of the club, with 54 goals. He signed for Barca in the summer of 2004 for a transfer fee of 24 million euros after a long series of three-way negotiations with RCD Mallorca and Real Madrid, thus becoming the first Cameroonian player to defend the Barca colours. He made his debut for FC Barcelona in the first game of the season at Rŕcing Santander, on August 29, 2004.

Since then, he has become a veritable goal machine, scoring 25 times in his first season and making a huge contribution to winning the championship. His goal against Levante clinched the league title. He has needed just 67 matches to reach the landmark figure of 50 goals, outstripping some of the great Barca legends of the past.

Since he joined the Club he has been chosen as African Player of the Year 2004, 2005 and 2006, and picked up third place in the FIFA World Player 2005. He is a full international and one of the outstanding players in the Cameroon team and has a huge popular following in his country.

In the 2005-06 season, he was the top scorer in the Spanish League with 26 goals. In the Champions League Final on May 17 in Paris, it was Eto'o who scored Barcelona's equaliser after the Blaugrana had gone a goal down to Arsenal.

Fast, strong and direct, Samuel Eto'o, who is 1.80 tall and weighs 75 kilos, boasts considerable experience, despite still only being 23. He's a committed player, whose hunger for goals never gets in the way of his desire to do the best for his team.

Eto'o is fast footed and capable of leaving his markers flailing behind him, with a strong shot and is also an experienced penalty taker.