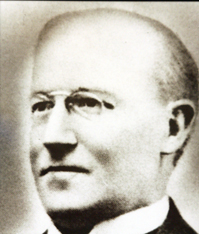 Walter Wild had the honour of being the first ever president of Fútbol Club Barcelona.

Wild was one of twelve people at the meeting at which the club was founded, held at the Solé Gymnasium on November 29, 1899. This well-to-do Englishman was the oldest of the original club members and his colleagues unanimously named him president.

Wild was a highly versatile gentleman who also appeared in ten matches for the team, including its very first. But what he will always be most remembered for was what he did as president. Wild allowed his flat in Carrer Princesa to be used for board meetings, and maintained an ongoing diplomatic dispute with another club, Catalŕ, as to which was the oldest football club in Barcelona. One of Wild’s most important achievements as president was the way he managed to get Barça its first home ground, at Hotel Casanovas.

Walter Wild was re-elected president three times between December 13, 1899 and December 27, 1900, but was forced to resign on April 25, 1901 because he had to go back to Britain, having been FC Barcelona president for 513 days. The same day that he presented his resignation, he was named an honorary member in recognition of everything he had done for the club.

Wild followed very little of the way the club progressed thereafter, and almost half a century later, when he was the guest of honour at FC Barcelona’s Golden Anniversary, he was astounded to see how the club he had presided over 50 years before had grown.