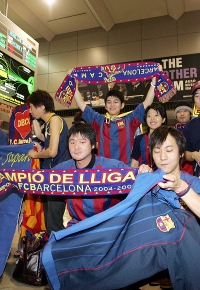 The slogan “more than a club” is open-ended in meaning.

It is perhaps this flexibility that makes it so appropriate for defining the complexities of FC Barcelona’s identity, a club that competes in a sporting sense on the field of play, but that also beats, every day, to the rhythm of its people’s concerns.

Today, football has become a global phenomenon, and support for Barcelona has spread spectacularly around the world. The number of club members from outside of Catalonia and Spain is increasing daily, and the club wants to respond to that show of passion for Barça. This has developed into a need and an obligation. And the best way for the club to do that has been to take a step further and become “more than a club around the world” as well. This Barça that is so concerned for its people needs to be globalised. This caring and humanitarian Barça needs to be globalised. It is a strategic decision that is in keeping with the club’s history and the way that football is continuing to develop on a worldwide basis.

That is why the club has decided to contribute 0.7 per cent of its ordinary income to the FC Barcelona Foundation in order to set up international cooperation programmes for development, supports the UN Millennium Development Goals and has made a commitment to Unicef’s humanitarian aid programs through the donation of one and a half million euros for the next five years and now wears the Unicef logo on its shirts. An agreement that has made Barça unique.