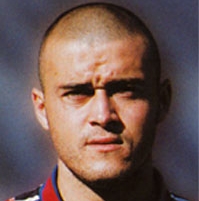 The popular ‘Lucho' (Gijón, 1970) came to FC Barcelona in the summer of 1996 as a free agent after having played at Real Madrid for five seasons.

Despite his Madrid past, he adapted quickly to his new club, and soon became one of the most charismatic players ever to represent FC Barcelona. 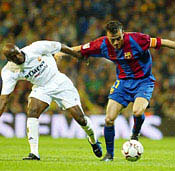 He was a born leader, and highly committed, for which reason Luis Enrique was one of the team captains. His finest quality was his versatility, the characteristic that best describes his way of playing, although there were so many more. He normally played as a linkman with the out and out striker, although he would also play in wider positions, or even as centre forward.

He was a skilled and tireless worker, and a great goalscorer too, especially when coming from behind, where he was never was one to throw in the towel, even in the most difficult of situations. He would constantly encourage his colleagues, and was an important squad member both on and off the pitch. The character and flair of this Asturian set an example for the fans to admire. He stayed at Barça until he finally hung up his boots in 2004.

From June 2008, Luis Enrique is the first team manager.