These are the safety guidelines provided by the Czech club for supporters attending the game between FC Barcelona and Viktoria Pilzen at the Eden Stadium. 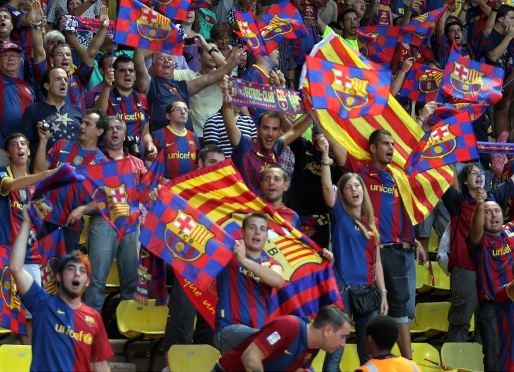 Josep Guardiola’s team fly out to Prague this Monday ahead of Tuesday’s game, the fourth in the Champions League group stage. Viktoria Pilzen have provided the following guidelines for visiting supporters.

- All supporters will undergo an extensive body search prior to entering the stadium. Your cooperation with the stadium security personnel is highly appreciated.

- It is forbidden to introduce or exhibit banners, posters, flags or any other form of visual support which uses symbols or emblems that may be an initiation to violence or xenophobia in the stadium. (The club’s stewards will be obliged to remove these at once.)

- It is forbidden to introduce any kind of weapon or object that can be thrown and that could potentially be used as a weapon. Any person who tries to introduce such objects (including drums, trumpets, megaphones, or any other large object) will be refused entry into the stadium. Small foldable umbrellas are authorised however conventional umbrellas with pointed tip or golf umbrellas will not be allowed in for safety reasons.

- It is forbidden to enter any flag or banner that comes on a pole. Poles and sticks (no matter how short or flexible) cannot be introduced to the visiting supporter sector. We suggest you remove the poles or sticks from the flags before arriving at the.

- There are no official deposits or similar arrangements available for leaving any object in the stadium therefore supporters are informed not to bring any objects with them that could risk being refused entry into the stadium. If any forbidden object is brought on the trip, supporters are highly advised to leave these at their hotel or on the bus to not risk having to leave them upon entry.

- Introduction or sale of alcoholic beverages in the stadium is forbidden. It is also not allowed to bring any other bottles or beverages that were not bought at the stadium.

- Bringing torches, fireworks or any pyrotechnic artefacts into the stadium is strictly forbidden. Anyone trying to enter such items will have their ticket confiscated and will be refused entry to the ground. We remind all spectators that it is against the law to bring such items into a sporting arena and infringers will be severely punished. Anyone who makes use of pyrotechnic artefacts inside the stadium compound risks a heavy fine and a jail sentence. If a firework, Bengal light or torch is lit inside the stadium compound, Police will intervene and arrest any person linked to such an infringement.

- It is also forbidden to bring into the stadium any object that could be considered a fire hazard (rolls of toilet paper, large paper posters/banners etc...) or that is too large to ensure the security of the spectators in the stadium.


In addition to the above guidelines supporters must respect the following:

- It is not allowed to throw any type of object among the other sectors of the stadium nor among spectators.

- All visiting supporters should follow instructions from the police and the club’s stewards and cooperate while getting to their seating area all together in the stands.

- FC Barcelona supporters should aim to be at Access 2, which is supposed for visiting fans entry only. The stadium opens at 18:15 and it is highly recommended to be there in advance.

- In case of infringement of any of these rules and/or disturbing public order, the Club can refuse entry or have the person responsible removed from the stadium.

- During the control at the stadium gates, any person who is considered to be drunk or under the influence of alcohol or drugs, can be refused entry or can be removed from the premises if causing disturbance once inside.

- The Club reserves itself the right to carry out whatever action deemed necessary to maintain a safe and orderly match organisation.