Several personalities from the country, club and sport in general attended the inauguration of the Masia, Oriol Tort Training Centre on a very proud day for FC Barcelona.

More info
National authorities, directors past and present of FC Barcelona, coaches and former coaches, players and former players, residents and former residents, relatives and famous sportspeople were all there for the inauguration of the new Masia building on Thursday evening. 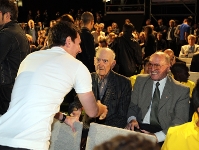 They all converged at Sant Joan Despí, including the President of the Generalitat, Artur Mas, club president, Sandro Rosell, four ex presidents (Montal, Nuńez, Gaspart and Reyna), the legendary Antoni Ramallets, the family of founder Joan Gamper, the representative of the Qatar Foundation, Andreas Bleicher and the first ever Balon D’Or winner to have lived at la Masia, Leo Messi, plus all of his team mates and head coach, Pep Guardiola, and the chief director of sport, Andoni Zubizarreta. Quite an assembly!

One of the main exponents of the talent that emerged from the old Masia at Can Planes and now working with the club’s youth system, Guillermo Amor, said that “this is a very happy day for everyone. It is a day to be enjoyed and to think that this is all because this is a club you can trust”. He was supported by Jordi Mestre, the director in charge of youth football, who said “this is a historic achievement. A building that is fantastic in terms of both size and content. It is right up to the standard of the club we have”. 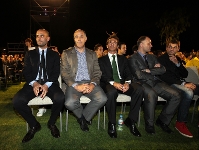 The current coach of Sabadell, Lluís Carreras, added that “I was at the Masia for six and a half years, the best years of my life. I enjoyed it a lot, you can’t sleep being so close to the Camp Nou! I didn’t only learn football here, but also how to live and to behave”. Josep Seguer, Joaquim Rifé, Salvador Sadurní, Ferran Olivella, Carles Rexach, Rafael Zuviría, Justo Tejada, Antonio Olmo and Sergi Barjuan were other former players that wanted to be here to witness the opening of the new Masia.

At the end of the event, the director of la Masia, Carles Folguera, spoke to Barça TV about the day. “It was very emotional and I’m very satisfied. It was magical day and we did it with the intention of bringing people together.” Folguera also liked the way that the first team players sat together with the Masia residents. “When we told them, the kids were thrilled” he said.