La Fundaciˇ has prepared a series of activities to coincide with Saturdayĺs game between Barša and Seville, as part of its agreement with the Gates Foundation to work against Polio. The players will wear shirts bearing the slogan ôEnd Polio". 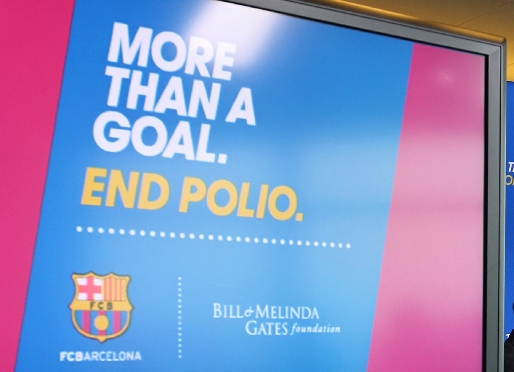 Barša’s commitment to working with the Bill & Melinda Gates Foundation will again be on show this Saturday during the game against Seville, a couple of days before World Polio Day due to be celebrated on Monday. Before the game, the players will wear shirts bearing the slogan ‘End Polio’ with the number 99, signifying the reduction of 99% of the disease throughout the world.

Showing for the video

The video screen at the Camp Nou will also show the film clip made to mark the alliance between the Fundaciˇ FC Barcelona land the Bill & Melinda Gates Foundation, which was first shown when the deal was announced in the summer and contains images of some of the great Barša heroes, as well as stressing the Club’s commitment to fight Polio.

The Fundaciˇ FC Barcelona and the Bill & Melinda Gates Foundation are currently preparing a new video, featuring Bill Gates, Sandro Rosell and Pep Guardiola, which will be released on Monday October 24 th.

Polio is an infectious disease which affects the nervous system and can lead to irreversible paralysis. The disease mainly attacks children and young people. Although the Department of Health of the Generalitat reports that the last known case of the disease in Catalonia was reported in 1983, but it is still present in a number of countries.

Since 1988 nearly 2,5 billion children have been vaccinated against Polio and the incidence of the disease has diminished by 99%, though it is still present in Asia and Africa.

Visit by youngsters from Israel and Palestine

The game will also see the visit of a group of Palestinian and Israeli youngsters from two sports clubs in Jerusalem, who are currently visiting Barcelona for a number of sporting and cultural events aimed at promoting co-operation between their two communities. This project is also backed by the Foundation, who have also programmed a visit to the Club in collaboration with the Fons CatalÓ de Cooperaciˇ. A delegation of three Israelis and three Arabs, who are also involved in the initiative through The Peres Center For Peace will also be present at the game.