Agreement with Audi until 2014

Agreement with Audi until 2014

Audi and FC Barcelona have agreed to the extension of their sponsorship agreement until 2014. The German company is official sponsor since the 2006-07 season. 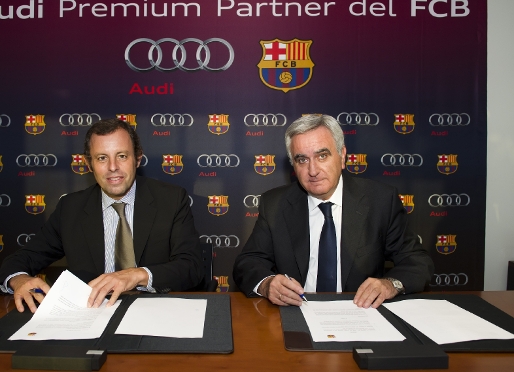 Audi and FC Barcelona signed the agreement for sponsorship renewal that will unite the two entities until 2014. With this new agreement Audi becomes Premium Partner and the relationship between the two organizations reaches a new dimension, as the German brand is also now the FC Barcelona official car, anywhere in the world. With this agreement, the Club continues to consolidate its sponsorship program with one of the world’s leading brands.
The new sponsorship deal allows Audi to expand their rights of association and the use of the Barça image for promotion at national and international level, marketing rights, use of the Barça installations, involving of players in advertising material, and various other hospitality services. In addition, Audi will continue to be linked with the Club on the pre-season tours that the first team undertake during the summer months. Besides the financial benefit that the Club will accrue, the German car brand will continue to provide cars for Barça first team players.

Audi became an official FC Barcelona sponsor in the 2006/07 season. Since then, the German brand joined FC Barcelona in a strategic alliance that has continued to position the two companies at the forefront of their fields of activity: the automotive world and the football world.

Audi is a premium car company based in the German city of Ingolstadt. The panoply of models, well known for its logo of four rings, responds faithfully to its slogan "at the forefront of technology". Tradition, technology, sportsmanship, and design, are the hallmarks of the brand via a refined and visionary character which creates the tendency to respond best to their clients’ needs. At present the Audi brand is seen in more than one hundred markets worldwide, and by 2015 there are plans to increase its product offerings up to 42 models. Audi produces vehicles in Ingolstadt and Neckarsulm (Germany), Györ (Hungary), Changchun (China) and Brussels (Belgium). Since June 2011, Audi’s last launch, the Audi Q3 is also manufactured in Martorell. In 2010, Audi, which has 60,000 employees around the world, produced around 1,092,400 cars and in the first half of 2011 has already sold 652,970.