The US consul for Spain has presented Sandro Rosell today with a letter in which Barack Obama shows his gratitude for the gifts that the Club’s delegation gave him during their visit to the White House last summer. 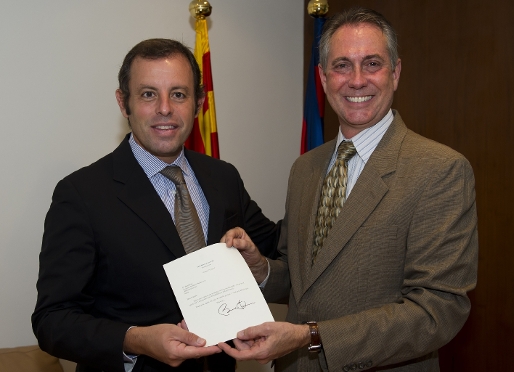 Gregory Crouch, general consul for the United States has visited the club’s installations to meet Sandro Rosell and discuss the visit made by the club’s representatives to the White House last summer, and also to hand over a letter from the president of the United States, Barack Obama, saying thank you for the gifts he received from the club, specifically two first team shirts.

"It’s a club with a fantastic reputation"

In reference to the increasing interest in Barça among the North American community, Crouch said "Barça have a fantastic reputation around the world and thanks to this club, soccer is increasing more widely known in the United States. Everybody knows who Messi is!".