In a solemn ceremony and accompanied by his family and friends, the FC Barcelona manager has received the greatest honorary distinction from the Parliament of Catalonia.

The words of Núria de Gispert

The president of the Parliament of Catalonia, Núria de Gispert, gave the reasons why Guardiola was chosen as the winner of this medal. “There are things that, nowadays, need to be seen in people like you … we wanted to honour a young person who has shown his implication in a project every single day, and who has shown commitment and has made such demands of himself”.
The Auditorium of the Parliament of Catalonia was the venue for the presentation of the Medal of Honour to this year’s winner, the manager of FC Barcelona, Josep Guardiola. As part of the events leading up to the National Day of Catalonia, the president of the Parliament, Núria de Gispert, has presented him with the greatest honour a Catalan can receive.

Watched by his proud parents, wife and siblings, Guardiola received the Gold Medal at exactly 19.47 on September 8, 2011, making him the tenth recipient of the award that was first instated in 2000. Looking grateful but a little nervous, in his acceptance speech Guardiola stuck to his favourite subjects, football and sport in general. 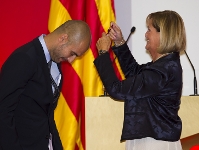 With the Gold Medal around his neck, Josep Guardiola gave a humble press conference at which he said “I was chosen. Anybody else could have been chosen to be the manager of FC Barcelona.” He preferred to pass the merit for his sitting there in the Parliament building to the people that offered him the job, to the people he learned from, and also to his players, who he says are learning new things every day.

He went on to add that “all I can say is that I love my job. I am passionate about my job, I adore it!” He said that in the build up to a match, he likes to examine the opposition alone, whereupon it dawns on him that “we can win. It is at that moment that I really feel my love for this job. I just want to do this job that I love so much as well as I can”. 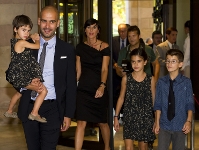 Guardiola also spoke about the role of sport in education. “What I learned is how a football team is a microsystem. I am who I am because I have done sport”. He preferred to quote former handball coach Barça Valero Rivera at this point. “Barça makes us all good. You live your profession while thanking this institution and never asking for anything in return from the institution.”

Guardiola ended by saying that the Parliament of Catalonia’s Gold Medal is something “I shall wear as well as I can … If we lift ourselves up in good time and start to think, believe me, we are an unstoppable country. Grŕcies i Visca Catalunya”.