Toni Freixa announced that the Board would submit a budget for the coming year, based on income of €460,1 million and profits of 20,1 million. The board spokesmen also reiterated the Club’s commitment to zero tolerance of violent behaviour. 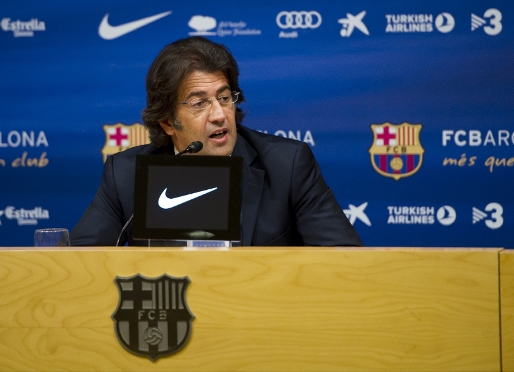 One of the main points that the Members’ Representatives Assembly will be discussing on September 24th is the proposed budget for the 2011-12 season. The first Board meeting after the summer break approved figures which represented income of 461,1 million Euros and expenditure of 430.2 –a forecast net profit of 20,1 million.

Toni Freixa also announced that the Club’s Economic Vice-President Javier Faus would present the figures to the media at some time over the next few days.

On another matter altogether, Sr Freixas made clear the Club’s commitment to zero tolerance of violence, stating: “I would like to publically state our position that fireworks have no place in the stadium. We continue to hold the line of zero tolerance with violence and have not let up on this matter at all. We applaud the measures taken in this respect by the previous Board of Sr Laporta”.

Regarding the possible disciplinary measures to be taken by UEFA as a result of the fireworks set off in Monaco, Sr Freixas explained: “we presented an appeal against this because the security measures taken at a stadium which is not ours, cannot be our responsibility. What’s more, the same thing happened in 2006 and 2009. Such incidents have no place at the Camp Nou”.

Helmets at the Camp Nou

Freixa also clarified the situation with regards motorcycle helmets, after a number of incidents at the stadium on Monday night: “we are sorry that we did not communicate beforehand that for security reasons and in line with local police regulations, helmets will not be permitted in the stadium as they are considered dangerous and can make it difficult to identify wrongdoers. As of the next game at the Camp Nou, helmets will not be allowed in the stadium”.

Finally, the board communicated the fact that the right of members representatives to meet with board members to discuss issues at the Assembly had been extended to 10 days – with meetings set for 15, 16, 19, 21 and 22 September, with a minimum of 25 members.