FC Barcelona to use QR codes.

FC Barcelona to use QR codes to promote Barça Fans

‘Draw for a shirt signed by the first team players for all people that register as Barça Fans at the www.fcbfans.com website using this mobile technology’.

Barça Fans, the official community for fans around the world

Barça Fans, the official community for FC Barcelona fans around the world now has more than 549,234 members (August 1 data), who enjoy a whole range of terrific benefits. This figure, added to Barça’s enormous following on Facebook (almost 20 million fans) and Twitter (with more than 3 million followers of the three accounts @fcbarcelona_cat, @fcbarcelona_es i @fcbarcelona), has made the Barça sentiment a global phenomenon. In recent weeks, Barça Fans has been growing in extraordinary fashion not just in Spain but also the United States, Colombia, Venezuela, Mexico, India, Poland and Morocco.
FC Barcelona has placed several posters with QR codes around its grounds. The club wants to give all people that visit the Camp Nou the chance to win a shirt signed by the first team football squad. All they have to do is registers as Barça Fans (www.fcbfans.com) on their mobiles between August 9 and September 15. QR codes are the a latest generation mobile technology by which a graphic image is used to connect automatically to the Barça Fans website, the global community of FC Barcelona fans. In order to take part, entrants will need a Smartphone with a camera and QR detector. 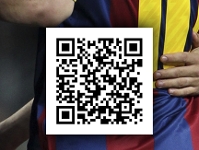 However, fans that do not have a Smartphone can still take part in the competition by registering directly at the following address: http://arxiu.fcbarcelona.cat/web/catala/zona-fcb/promo/

The black and white QR posters can be seen at the ticket offices, the Megastore checkout desks and on entry to the Museum, while the shirt the entrants are vying for is on display just outside the entrance to the Camp Nou Experience.

In fact, fans that visit the Camp Nou Experience are already asking what they need to do to win this shirt signed by the winners of la Liga and the Champions League.

The draw will take place on September 20 before a notary, but this is not the only thing that Barça fans from around the world can benefit from. Being a Barça Fan means enjoying a whole range of advantages: newsletters, mobile applications, interactive screensaver, etc.