“The team know how to make it look easy”

Rosell: “the team know how to make it look easy”

After tonight’s game, Club President Sandro Rosell expressed his satisfaction with the win and also stressed the “exquisite” treatment received from the Espanyol Directors during the derby.

According to Sr Rosell: “every game is complicated, but this team know how to make it look easy”.

In his first visit to the Cornella Stadium as Club President, Sr Rosell thanked the Espanyol Board of Directors, commenting: “they treated us marvellously. We got exquisite treatment and I have nothing but thanks for them”.

Only rivals on the pitch

The President explained his view of the rivalry between the teams: “we are neighbours and there are many Espanyol people who are friends with Barça fans – rivalry on the pitch is one thing, but it’s another thing off the pitch and they treated us really well today”. 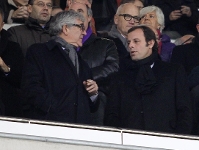