King Abdalah and Queen Rania of Jordan were guests of honour in the Directors Box at the Nou Camp tonight for the game against Villarreal.

Club President Sandro Rosell received the Royal couple who took advantage of a private visit to the city to attend the game. 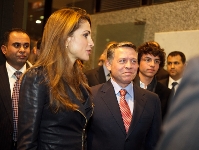 Under heavy security, King Abdalah and Queen watched the game from the Directors Box with two of their four children, Iman and Hussein, who is well known for his love of the game and one of the reasons the Royals came to the game.

This is not the first time that Queen Rania has visited the Nou Camp as she attended the U2 concert at the stadium two summers ago as a guest of the group’s singer Bono. 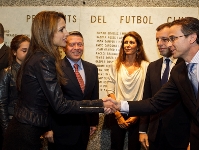