Gate number 2 at Espanyol’s Cornellŕ-El Prat stadium will house the T-shirt that Andres Iniesta revealed after scoring his World Cup winning goal in South Africa which bore a homage to the late Dani Jarque. 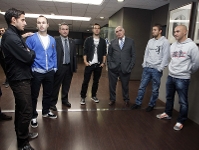 “Dani Jarque, sempre amb nosaltres.” – “Dani Jarque you are always with us” read the message on the T-shirt Andres Iniesta showed the world as he celebrated his goal in the final for Spain and this Thursday that shirt was presented by the Barça midfielder to Jarque’s club Espanyol at their Cornellŕ-El Prat Stadium in an emotional ceremony which was kept private at the express wishes of Jarque and Iniesta’s families.

As a sign of gratitude, the Espanyol President Dani Sánchez Llibre presented Iniesta with his club’s maximum distinction, the gold and diamond brooch.

“This is the best place for the shirt” 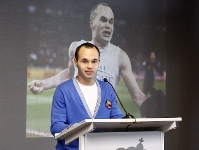 “It’s hard to control my emotions. I didn’t want to give up this shirt, but I think this is the best place for it”, explained a clearly upset Iniesta. Andres and Dani shared a great friendship before the Espanyol captain’s tragic death in August 2009 and the Barça man went on: “I scored that goal, but he will be remembered too”.

Dani Sánchez Llibre thanked Iniesta for his gesture and praised him for his manner on and off the pitch: “I always thought you were a star, but this is something unbelievably special from you”. The Espanyol President also explained that Iniesta was a much loved figure at his club and all over the country because of his attitude. 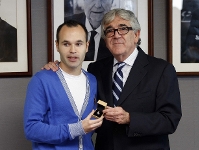 Barça President Sandro Rosell was also present at the presentation which was held in the main stand of the ground, and was accompanied by Vice Presidents Josep Maria Bartomeu and Carles Vilarrubí and Board Member Jordi Mestre. Jarque’s mother and family members and Espanyol players including Ferran Corominas, Iván de la Peńa, David García and Luis García as well as coach Mauricio Pochettino also attended, as did Iniesta’s agent Mágico Díaz, who was also Jarque’s, and the majority of the Espanyol board. 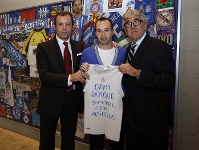 The T-shirt will form part of the mural dedicated to the much loved Espanyol captain at the gate number 21 to the club’s stadium. Dani Jarque wore the number 21 shirt for his team.