The Barça first team will hand over signed shirts from Tuesday’s game with Copenhagen so that they can be auctioned off for Peter Schmeichel’s initiative to fight breast cancer.

The players are not just travelling to Denmark to book a place in the next round of the Champions League, they are also going to make a contribution to the ex-Manchester United keeper’s charity initiative against breast cancer. The party will be taking three shirts signed by the squad and boss Josep Guardiola and will hand them over to Schmeichel via the international delegate of the club’s Social Commission Josep Maria Barnils.

The shirts will be auctioned off via the webpage www.lauritz.com in an auction which is set to last from November 2nd to 7th, according to Schmeichel who made the announcement at a gala dinner organised by Danish TV who are also collaborating with the initiative.

Shirts to be handed over after the match

Once Tuesday’s game has finished, Josep Maria Barnils will hand over the shirts on behalf of the Club to the Danish TV. In this way, the team will be joining the solidarity already shown by a number of Danish professional clubs in support of the imitative. 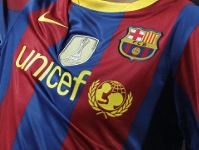