FC Barcelona economic vice president Javier Faus has revealed that the club lost €79.6 million during the 2009/10 season, but was able to send a message of optimism to the general assembly on Saturday morning.

Addressing delegates at the Palau de Congresos the Blaugrana director outlined the economic picture over the past 12 months and explained: "Our club is in rude health in regards to income, with a prestige and known brand that is recognised globally, but there is a serious structural problem with expenses." The figure of minus €79.6 million was discovered in the audit carried out by Deloitte. 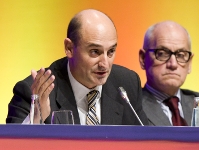 Alongside director Jordi Moix, Faus explained in detail the differences between the departure of the previous board without an audit and the one that he has reformulated. There were seven conditions that explained the difference between the €11.1 million in profit predicted by the previous board and current audit findings of €79.6 in losses. They were Mediapro bonus (12), Mediapro reward (3.2), Sogecable (37.8), Thierry Henry's exit (8.2), Baena (3.9), land at Sant Joan Despi (14.9) and Viladecans (11.6).

Despite the negative results Faus was still optimistic. "Income (415.4) has been the highest in history, spectacular," he said. "In an worldwide economic crisis the club still managed eight per cent more than the 2008/09 season and that has been focussed on improvements in areas such television. The distribution of income is very healthy, although in the games at the stadium and marketing the income have slowed. Good contracts have been signed with Turkish Airlines and Etisalat and sales have increased at the FCBotiga. The current board will continue to make every effort to increase income even further." 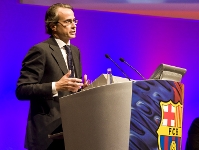 Faus then explained that expenses had risen. "The most important area, of course, is the one of sporting expenses," he explained. "They rose to €306.25 million, which is an increase of 21 per cent. The other management outgoings have also risen considerably to around ten per cent more. The club funds are again in the red."

Conclusions were then given with Faus revealing the board's plans. "Our priority is to start earning money in a recurring way and to reduce the debt so that investment in the sporting side can continue as well as in our installations and in giving a better service to members. We are absolutely convinced that we will do that." 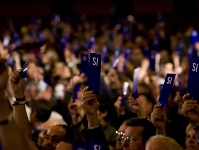