Sandro Rosell highlighted the importance of club members in the day-to-day running of the club and how he intends to achieve the main challenges of the new board's strategic plan by 2013 when addressing the general assembly on Saturday.

The FC Barcelona president spoke to delegates for the first time since he took over at camp Nou and outline his vision for the coming years and the role that he believes that everyone connected to the club will play. Rosell was keen to state that the starting point he has found is not good and neither is the economic situation in the short term. 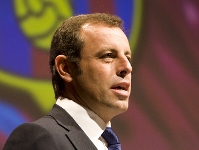 Focussing on the strategic plan laid out by his board of directors, Rosell explained that it would be "based around growth" and that would be achieve during the first phase of his plan for 2013. On the economic state of the club he assured that the turnover would be able to rise to €500 million with some positive exploitation "of around 10 per cent" with nearly €50 million in profit per season. That would then allow the level of bank debt to be reduced to "sustainable amounts".

To reach an income of €500 million Rosell highlighted the internationalisation of the club and detailed a plan that will support with capitalisation of key sports and the emotional value of the Barça brand. Also, the business will look for new way to exploit and improve contracts with sponsors.

On the sporting front the president looked ahead to 2013 and stated that he wants the new Masía at the Ciutat Esportiva to be "consolidated" and work like a model that would work across the club. The aim is to reach "sporting excellence" together with the hard work of all along with "a programme of internationalisation, both formative and professional". 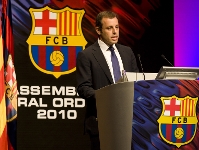 Socially, again looking ahead to 2013, Rosell wanted to "implement an host of initiatives and resources that will allow the level of member participation and the relationship with the club to grow". For that he believes that the implementation of the Espai Barça and in the approval of more technological resources would help.

Apart from the challenges of the future, Rosell also summarised some of his first acts at the helm as the club centred on austerity and transparency of management. He insisted on being sensitive to things that affect members and the change of orientation of the club Fundació while wanting to remain centred on the area of Catalunya. He also detailed the patrimonial turnaround happening at the club, looking at stopping the reclassification of the Miniestadi, as well as clarifying that the economic situation will oblige the club to extend the time limit of the Espai Barça project. Rosell also insisted on spending on other sports and has set aside a budget of €49 million. 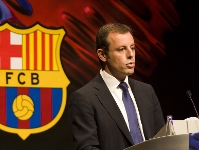 Sandro Rosell was keen to pay tribute to football coach Pep Guardiola at the club's general assembly. "We have the best trainer in the world," he said. "We hope that he stays here for many years at the helm of the first team. That is what all Barça fans want. He is our reference point. He has given us so much and will continue to do so for many years. I am totally convinced."