Xanti Pablo, president of the supporters club that organised the World Meeting was pleased with the way the event went and how supportive the club was of everything.

After working for two and a half years on the candidacy and then organising it, the PB Donosti, organiser of the XXXIII World Meeting, is highly satisfied. Xanti Pablo, its president, told www.fcbarcelona.cat and Barça TV that it had been a resounding success. “We are very happy, it seems everyone is satisfied and if the members are, then we are too”, said Pablo.

Although it is Real Sociedad territory, Sant Sebastian went Blaugrana for a weekend and the organisers were delighted that President Rosell made an appearance. “Him coming raised the profile of the Meeting and for us it was very important that he came”, said the president of the PB Donosti. 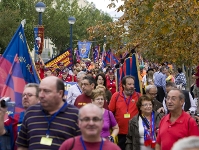 More than 200 supporters clubs and about 1,500 members have left the capital of Guipúscoa with a good taste in their mouth, especially thanks to all the culinary delights on offer. “It forms part of our thousand years of history and also our present and we wanted the guests to enjoy our products”, said the organiser of the event. 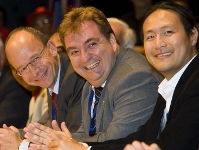 Some of the visitors to the Basque Country took advantage of the long bank holiday weekend to have a short break in the beautiful region.