The Nou Camp paid homage to the team that won Five Cups before the game against Mallorca tonight with special honours paid to Eduardo Manchón, who died this week.

It was a solemn homage to the Five Cups team tonight, as Antoni Ramallets, Gustau Biosca, Josep Seguer, Jordi Vila, Lluís Aloy and Estanislau Basora, as well as the widow and children of Eduard Manchón attended a short ceremony at the ground. 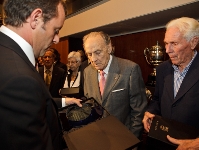 The Board of Directors, headed by President Sandro Rosell presented a commemorative plaque with the inscription: “FC Barcelona recognise the extraordinary work done to defend our colours and wish to remember the golden age of our history – the Five Cup Barça team”. 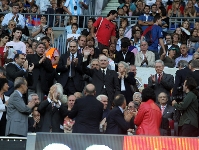 Shortly afterwards, the announcer of the Nou Camp, Manel Vich, read out the names of the great team for the fans to pay homage, whilst Joan Manuel Serrat’s “Temps era Temps” song rang out. Then there was a minute’s silence for Manchón accompanied by the ‘Cant dels ocells’. 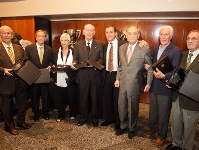 It was an emotional night and as the fans applauded, Antoni Ramalelts could not contain his tears as he hugged Eduard Manchón’s widow and children.