More than 5,500 Columbian refugees living in Ecuador have benefited from projects jointly sponsored by the FCB Foundation and the UN refugee agency. These projects use sport to improve social cohesion and improve access to health care and education.

Over the last seven months, the FC Barcelona Foundation, in collaboration with the United Nations High Commissioner for Refugees, has been carrying out cultural, educational and leisure activities with young Columbian refugees living in Ecuador. 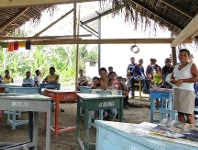 The projects are part of an agreement between the two bodies dating back to 2008. Thanks to these activities, the Columbian refugees have been able to interact with the local population and distance themselves from a life of drug and alcohol addiction, crime and prostitution. Unlike the case of refugees in many other countries, the Columbians do not live in camps but are placed in villages along the frontier between the two countries. They have been forced to leave Columbia and seek shelter in Ecuador due to the violent internal conflicts that have intensified since the late 80’s.

A sports programme has helped bring the two populations together in the urban areas of Lake Agrio and the Esmeraldas.

A number of football, swimming, cycling and triathlon tournaments have been set up involving mixed teams of Ecuadorians and Columbians, including women and children. Thanks to these tournaments it has been possible to establish friendly relations between two communities that were in constant conflict. 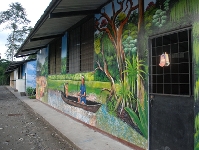 Another successful aspect of the collaboration has been to help the refugees gain access to their fundamental rights. Over the last seven months, a programme of information, consisting of talks and written material, has been directed at Ecuadorian public employees – teachers, doctors, nurses, civil servants etc – and to the Columbian refugees themselves.

This campaign has helped local professional people understand that the Columbian refugees have the same rights as Ecuadorian citizens. A ministerial agreement announced in 2006 guaranteed the refuges access to education and in 2007 Ecuador put into action a campaign to inform the refugees of their right to free health care. 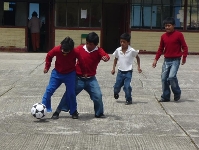 Refurbishment of a reception hostel

The Foundation has also financed the refurbishment of the APAFANO hostel located in the Sucumbios province. This are is very close to the frontier with Columbia and serves as a temporary refuge for those Columbians escaping from their country because they feel threatened or persecuted and who arrive penniless. Here they find protection and receive aid until UNHCR can find them a safe place to live. The improvements include a sports court, educational material and redecoration.