Lionel Messi has visited the island of Haiti to lend his support to the victims of the January earthquake in what was his first trip as a UNICEF Goodwill Ambassador.

The Argentinian took a break for his summer holidays to see the devastation first hand and do what he could to help all involved. His first port of call was to Carrefour Aviation, a camp where around 50,000 people live after they lost their houses in the disaster.

At the camp Messi showed why he was chosen as a UNICEF Goodwill Ambassador in March as he met children who play sport as part of the UNICEF project that was implemented by the Haitian Olympic Committee. 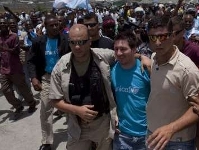 Messi also visited a group Argentinians who are working for the United Nations in the area and heard how they have been able to help the locals since the earthquake and how the reconstruction effort is going.

Before ending his visit the Barça star visited the UNICEF offices where he met more people who are helping the Haiti government to deal with the catastrophe that saw around 220,000 people to die. 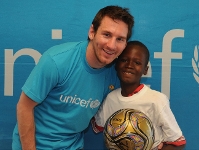