Rosell: “Thanks to everyone”

Rosell: “Thanks to everyone”

Club President Sandro Rosell believes that tonight’s win meant “the climax of happiness” and insisted on thanking all the people who’d helped to bring about the team’s success. 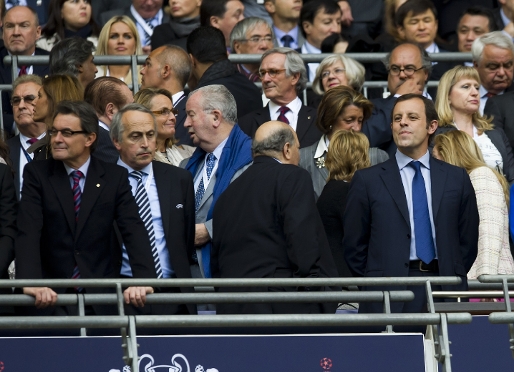 Sr Rosell spoke after the game and said: “I want to thank the best manager in the world, the best player in the world- Messi and his teammates: Puyol, for being the best captain in the world and for what he did for Abidal. Thanks to Wembley , to London and all the Catalan people. Thank you to our city, our new and old mayor. Thanks you to the board and especially to all the people who have been working at the club to make all of this possible. As President, the only words that I can say are ‘thank you’. As a Club member, I’d also like to thank my mother and my father”.

The President believes that the 3-1 win over United is “a tribute to football. The values these players give out are different from other players”. Rosell also revealed that the Club had received a message of congratulations from King Joan Carlos. “he congratulated us, Congratulated Pep, the players for the spectacle they gave to the whole world -because Barça love football!”

The President called the night “impressive, fabulous, fantastic” and also called for “common sense” from the fans when they go and celebrate: “we have the best fans and I hope that on Sunday, everyone will greet us as heroes”.

The Catalan President Artur Mas also expressed his satisfaction with Barça’s win: “this is an exceptional team and we are living an exceptional moment. We are a a great team - Visca Catalonia!”