Commitment to knowledge based society

Commitment to knowledge based society

Qatar Foundation focuses its work on education, research and community development in order to convert Qatar into a country based on its human capital. Barça will also take part in the Foundation’s social projects.

Contacts with the Fundació FC Barcelona

Haya Al Nassr spoke excitedly about he first contacts between the Qatar Foundation and the Fundació FC Barcelona to develop common projects. And revealed: “we will also be working together in projects to promote sport”.
Although it only recently celebrated its 15th anniversary, the Qatar Foundation has ambitious projects which aim to transform its society, beginning with social change. Almost all the work of the Foundation is based on three pillars: education, investigation and community development. The Head of Communication at the Foundation, Haya Al Nassr explains: “we wish to diversify our economy, we don’t want to always live off oil and our transformation is based on our human capital”. 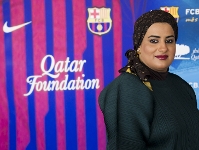 According to Al Nassr, the synergies between Barça and the Qatar Foundation: “are natural, because we share values and have many social projects to work on in the future”. The agreement between the two entities, which was signed amid much media coverage last December, is for five years.

Qatar Foundation believes that education is essential to transform its country and has built Education City -a campus to house more than 4,000 students from 90 different countries which contains institutions from elementary to university level, including centres from prestigious institutions such as Weill Cornell Medical College or University College London: “this means that young people have greater opportunities in their lives and we can help them open more doors”, explained Al Nassr. 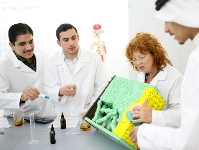 Science and research is another pillar of the Foundation’s work and it looks to employ these two areas to resolve local problems, developing new health technologies, environmental and IT studies. The Qatar Science and Technology Park has been set up with investment of 300 million dollars and the Sidra Medical Research Center, which is set to open in 2012, will employ 4,500 doctors.

The community development projects of the Foundation are those which Barça will be most closely connected with and Al Nassr explained: “our objective is to work in Asia, in Pakistan, Indonesia and other countries who are suffering conflicts, to offer them help in the areas of health, education, nutrition etcetera”. Part of these projects will be carried out with the Fundació FC Barcelona and are currently being studied.