"Nike is a great company to work with"

"Nike is a great company to work with"

In the presentation of the club kit for next season, President Sandro Rosell described Nike as "the best travel companion" and expressed his happiness to show Qatar Foundation and UNICEF on the shirt.

More info
The particularities of the kit for next season were presented on Tuesday in the corridors by gate 54 of the south stand at the Camp Nou. It was an event full of sound and visual stimuli, where they played around with light and color before the long awaited moment: the presentation of the Barça match and training kit, and the new “Express” line. 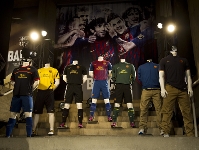 Later, Sandro Rosell spoke about the new kit. According to him, "Barça is more than a club for many reasons, and one of those is because it has the best travel companions." He added: "Nike is a brand reference, it’s more than just a brand and we are delighted to have the best with us. They’ve come up with an ecological, innovative, groundbreaking, and daring design, that won’t leave anybody indifferent”.

"Today it’s already the best selling shirt ever, and that means more revenue for the club," he said. In addition, Rosell reminded how loyal Nike were in the early years of the contract, when titles were scarce: "We hope that the partnership continues for many years. In the bad times for Barça, they stayed with us and renewed the contract. It’s really gratifying to know that they were by our side in the bad times. This shows that Nike are a great company to work with.

On the other hand, the Barça president highlighted one of the shirt’s novelties. "Qatar Foundation will appear on the shirt, which is really important. Thanks to this we won’t have to raise season ticket prices, nor sell assets or players". At the same time he expressed his joy at "continuing with UNICEF". Before Rosell spoke, the CEO of Nike Inc., Marcos Garza, pointed out that the shirt "is made from eight recycled plastic bottles”. 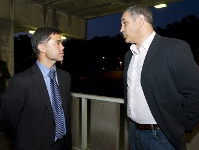 The presentation was attended by many personalities. The majority of the Board was there, the sports director of professional football Andoni Zubizarreta, members of the different sporting sections like Xavi Pascual (handball), Lazlo Nagy and Javier Rodriguez, the Secretary General for Sport Ivan Tibau, and also numerous representatives from Nike, Qatar Foundation, and Unicef.

Speaking to Barça TV, Zubizarreta believes that the new shirt "breaks with what we traditionally thought that was normal”. He also had words for the other kits: "The black reserve strip is elegant and will be great to wear, although I instinctively look at the goalkeepers shirt. I've always liked the color green".