‘Thanks Team” the mosaic for Tuesday

Catalan and Barēa flags, as well as a message of thanks formed by 95,000 cards handed out to the fans will greet the team at the Nou Camp on Tuesday. Fans can take part in this homage to the team via Twitter, with the hashtag #graciesequip.

Get to the game on time

The Club would also like to take the opportunity to remind fans of the importance of arriving at Tuesday’s game on time, so as to ensure that the mosaic can be completed and ready for when the players come out onto the pitch. Let’s give our team one of those great atmospheric evenings to help and push the team through to the final.
The team will be given a special welcome as they attempt to seal their place at Wembley and for the final “El Classico” game of the season, Guardiola’s team will be grateful for all the support the fans can provide. The Club and the fans are determined to give the team all the support they can and a massive message - “Thanks Team” - will be displayed via 95,000 cards handed out to supporters before the match. The Catalan flag will also be visible, with the cards making the red and yellow flag behind the goals and the Barēa flag created in the main stand. A total of 95,000 cards to form an impressive mosaic to help cheer Barēa on their way to Wembley. 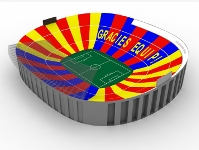 The Nou Camp won’t be the only place where the fans will be giving their thanks to the team - as all fans can join in via Twitter, with the hashtag #graciesequip. From this Sunday, fans can show their message of thanks and support for the side. The Club is the leading sports entity on social networks, with 13 million followers and this is the best way of connecting with the club and showing the fans’ total commitment and support to the side.