Like in 2009, the Fan Zone in Valencia’s university zone is the meeting place for fans that are attending the cup final in the city.

In order to ensure the Copa del Rey is a proper party, the Diputació Provincial de Valčncia, along with the Federació Espanyola de Penyes de Futbol (AFEPE) has organised a meeting for both sets of fans. This happened in the local government’s own building, and was attended by FC Barcelona’s vice president of the Social Area, Jordi Cardoner, Social Commission member Pau Vilanova, and former player Migueli. They met with the president of the Diputació de Valčncia, Alfonso Rus Terol, the vice president of Real Madrid, Eduardo Fernández de Blas, former Madrid star, Emilio Butragueńo, and José Suárez, president of the AFEPE.
Jordi Cardoner thanked the Diputació for arranging such a gesture that “brings together the two sets of fans before today’s match and defends the values of the world of sport”. Speaking about possible tensions surrounding the final, Cardoner said “we are responsible and this will go no further than being a football match … this is going to be a party”.
The Fan Zone opened its doors at 10.00 am for all FCB supporters that have made their way to Valencia. As the day has gone by, more and more fans have gathered there to enjoy the build-up to the big game in the company of fellow supporters.

In the Fan Zone, there are a number of activities that will help the fans enjoy the rest of the day as they wait the grand final this evening. Decked out in shirts, flags, scarves and anything else bearing the FC Barcelona colours, there is also a face-paint workshop where fans can ensure they look even more the part for the match. 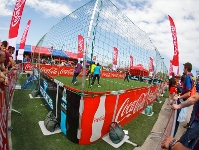 Like two years ago, the Fan Zone also offers other attractions such as a giant foosball, catering and plenty of bands to provide musical accompaniment.

Barça TV is there as well and fans can watch its coverage of the day on giant screens set up in the zone.

Vice presidents of FC Barcelona, Jordi Cardoner and Carles Vilarrubí naturally made their way to the Fan Zone to experience the wonderful Barça mood for themselves. Both spent a good while enjoying themselves in the company of the Barça fans, members and supporters clubs in Valencia.

The Fan Zone closes at 19.30, meaning the final cannot be watched from this facility.