Meeting with ambassadors from Arab countries

Meeting with ambassadors from Arab countries 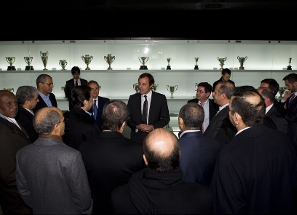 The visit formed part of Sandro Rosell’s intention of regularly holding meetings with foreign ambassadors to examine ways of creating links with other countries. These ambassadors are in Barcelona for a series of institutional visits, having been invited by the Prince and Ambassador of Saudi Arabia in Spain, Amir Saud Bin Naif Bin Abdalaziz, and none of them wanted miss this chance to get to see the football club from within.

Barça as a nexus between cultures

The meeting was held in the FC Barcelona Museum, where the president started by addressing some words to the ambassadors. Rosell welcomed them in person and spoke about FC Barcelona’s desire to use sport as a nexus between cultures and on that issue asked his guests to “help promote the name of FC Barcelona in their countries”.

Visit to the Camp Nou Experience

Rosell and the ambassadors posed for a photo with Messi’s Ballon d’Or, which is located on the first floor of the museum. The diplomats then visited the Camp Nou Experience and admired the trophies and the Multimedia Zone, guided by Jordi Penas, the director of the Museum. They were also escorted by Mohamed Chaib, patron of the FC Barcelona Foundation. 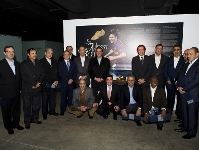 Hamd Bin Hamad Al Atiyah, ambassador of Qatar, said that Barça “projects many values” and is the “best known” team in his country. The proximity of Barça to Arab fans is patently clear, as mentioned by Ahmadou Souilem, ambassador of Morocco: “Barça is not alien to the Arab people or their youth, because they transmit clean and simple football”. The ambassador of Algeria, Mohamed Haneche, observed that “in Arab countries the rivalry between Barça and Madrid is lived with much intensity”. 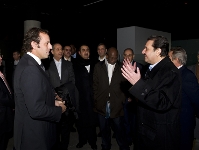