La Masia is set to once again become the institutional home of the Club. The building served the same purpose from 1966 to 1978 and was in fact first used by the Club as an office for the architects building the Nou Camp.

The Board announced on Tuesday that the Masia building would become the Club’s institutional home once the young players housed there move to their new building at the Ciutat Esportiva. The Masia will thus revert back to one of its previous uses for the Club. 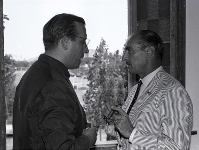 Once the Nou Camp had been inaugurated in 1957, the Masia became less important and its use rather unclear. A few years later in 1966, the then President Enric Llaudet decided it should become the Institutional HQ of the Club, taking over from the one in Carrer Pau Claris. The building was prepared for its new function and opened on September 26th 1966 to also house the Club’s offices. 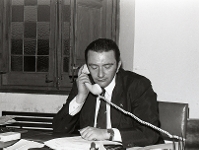 The structure of the Club in that period was not very complex and the building was big enough for both administrative and representative events. The Masia began to become a more important image for the Club and housed Presidential offices–Agustí Montal was the President who occupied it for the longest- was where the Club presented new players, including Johan Cruyff, and was where Presidential and other high ranking executives’ press conferences were held. There were even members’ protests which ended up at the Masia. 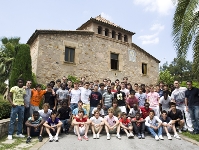 Over the 12 years from its change of use, the Club’s administration grew, as did the Club itself, and the building gradually became too small. In 1978 the Board of Josep Lluís Núńez decided to move the offices to a specially built new complex next to the ice rink. A few months later in 1978, the Masia began its new role as a home to aspiring young sportsmen, a role that has made it famous throughout the world.

The latest decision to return representative functions to the Masia, whilst keeping the administrative offices in their present building, means this wonderful building – an example of traditional Catalan construction and a witness to the creation of our stadium, again becomes the heart of the Club’s representative image. 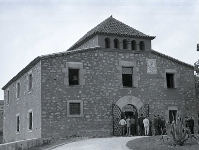