Leo Messi winning the Ballon d’Or has made most of the headlines in Spain, but the story was also reported elsewhere in the world, especially in his home continent of South America.

If there is any one person that is dominating the news right now, then his name is Leo Messi. The FIFA Ballon d’Or 2010 is in the headlines in Catalonia, Spain and the rest of the world. 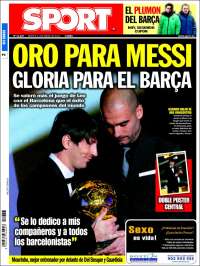 Other papers expressed their shock that neither Iniesta nor Xavi collected the award after all they did at the World Cup in South Africa. ‘Marca’ bemoans ‘Two giants and one anti-Spanish’ with pictures of Messi and Mourinho. The paper was annoyed that FIFA and Sepp Blatter failed to recognise any of Xavi, Iniesta or Del Bosque. ‘As’ was of a similar mind, and felt ‘Spain is seething’ that Messi was picked ahead of Iniesta and Xavi. 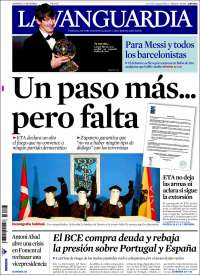 Despite the important announcement of the ETA ceasefire, Leo Messi and his prize also got plenty of coverage in the national broadsheets. ‘El Periódico de Catalunya’, ‘La Vanguardia’ and ‘Ara’ all included front page stories and extensive coverage of the events in Zurich.

‘El País’, ‘El Mundo’, ‘Público’ and ‘ABC’ also reported on Messi’s award, and the general suggestion was that the Argentine star is up there with Di Stefano, Pelé, Cruyff and Maradona. 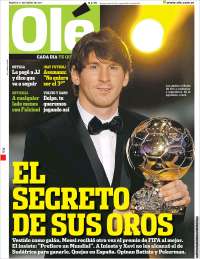 And naturally there was joy in Messi’s home country. In Argentina, ‘Olé’ filled the front page with the news, under the headline ‘The secret of his golds’. ‘Clarín’ and ‘La Nación’ also had plenty to say about the award.

But other Latin American countries also hailed yet another success for the Bará striker, including Brazilian daily O’Globo. 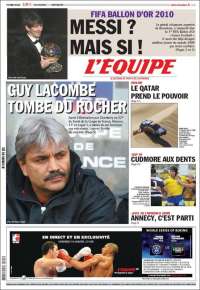 Back in Europe, the FIFA party was also a major story. French paper ‘L’Équipe’, for instance, titled its report with the play on words ‘Messi? Mais sí’.

But Italian sports paper ‘Gazzetta dello Sport’ was less impressed with the decision, and felt it was a “Ballon d’Or for a disappointing year”, while ‘Corriere dello Sport’ also considered it surprising that Messi was chosen. 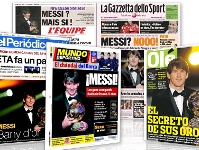 From Albacete to Switzerland

Castile-La Mancha paper ‘La Verdad’ also reported on the Ballon d’Or, where there had been huge hopes that Andrés Iniesta, from Fuentealbilla, would win them the award. There was a sense of disappointment that “Messi leaves Iniesta without the Ballon d’Or”.

The host country naturally reported on the arrival of so many stars in the country, and ‘Le Matin’ reported by saying the best in the world is ‘Still Messi’.