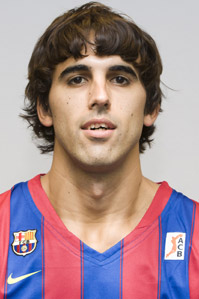 Víctor Sada was the second major returnee to Barça in 2008 after Juan Carlos Navarro.

Sada’s association with the basketball world should be no surprise, after all, his brothers also played the game, as did his father, Adolfo Sada, a former FC Barcelona man himself.

Aged 11, Sada joined Barça, where he grew as a basketball player and a person.

2003/04 Season
On 16 October, 2003 Víctor Sada, after ten years with the youth teams at Barça, made his debut with the first team under the orders of Svetislav Pesic.

He played a secondary role, but gained experience in a team that rewrote the club history books by winning the first ever Euroleague. Pesic used Sada in 12 games in the ACB, in four of which he was the starting point guard. In the Euroleague he played a similar role, playing four matches, three in the regular season and one in the Top 16.

2004/05 Season
In the 2004/05 season Víctor Sada played a more notorious role. The season started strongly, winning the ACB Supercup. The point guard had won his position in the club hierarchy, had made a major contribution, playing in 21 matches in the ACB and in 13 in the Euroleague.

2005/2006 Season
But at Barça, the man from Badalona struggled to gain a regular place in such a star studded squad. So the next season he decided to make a move.

He had grown as a professional and team leader, learning much under the expert guidance of Dusko Ivanovic.

He is a toughly built player and has plenty of skill, and became the first choice replacement for starting point guard Shammond Williams.

2006/2007 Season
But he left, going with coach Svetislav Pesic to Akasvayu Girona.

The point guard played a far more prominent role there and was able to take the kind of responsibilities he craved.

In two years at Akasvayu, Sada developed into the franchise player. In his first year in Girona, Sada guided Akasvayu to the FIBA Eurocup crown against Ukrainian outfit Azovmash, winning 79-72.

His club also reached the play-offs for the ACB title after ending fifth in the regular season. Fate had it that they would meet Barça in the quarters. Barça won the series 3-1.

2007/2008 Season
The next season, Víctor Sada continued his upward mobility: Akasvayu lost the Final Eight of the ULEB Cup in Turin against DKV Joventut, 54-79.

They also returned to the play-offs but in quarterfinal it was La Penya, again, who prevented them making it into the semi final, winning the best of three series 2-1.

2008/09 Season
Those two years with Girona got Joan Creus and Xavi Pascual thinking about bringing the player back. Víctor Sada returned to Barça after signing a contract for four seasons. Sada’s defensive abilities made him an indispensable member of the Barça line up. He became the sixth highest valued player in the team, and was in the top 15 in the ACB for both assists and steals.

2009-10 Season
Although his time on court was limited because the team had three point guards, Victor Sada played a key role in the crucial moments of the season when the team needed him most. His greatest success was his brilliant performance in the Euroleague final. Going head-to-head with Olympiacos, Sada scored seven points and laid on assists, as well as helping out in defence. The best part of it is that Sada did not play a single minute in the semi-final against CSKA. After the game, however, his coach told him to get ready to play in the final, which he did. Sada handed out a lesson in team play and was one of the key players in Barça’s easy victory.

Apart from winning the Euroleague, the point guard from Badalona was also champion of the Catalan League, the ACB Supercup and the King’s Cup, winning the grand final against Real Madrid.

Others
His two older brothers, Adolfo and Quique, both played youth basketball at FC Barcelona.
His father, Adolfo, played for four seasons on the Barça first team.
After living in Girona, he fell in love with the city.
His partner, Maria, also plays basketball.
One of his biggest passions is reading. He always tries to have a book with him.
Part of his routine involves practicing 3-pointers from the half way line every day.
His favourite NBA team are the Los Angeles Lakers, and his favourite player, Magic Johnson.

PROFILE
Victor Sada is an eminently defensive player, although his vision of play has improved considerably in recent seasons and he is now a regular provider of assists. But it is defending where he shines, and he is one of the best stealers in the Spanish game. In the last two seasons at CB Girona, Sada has made more than one steal a game.