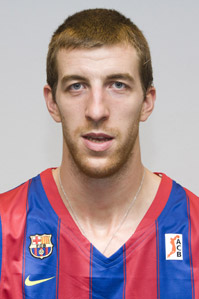 Fran Vázquez is one of the Spanish basketball’s top exponents of the interior game.

He started out at the prestigious training centre Siglo XXI and proved his worth in the ACB before signing for Barça in 2006. On the international stage he won the silver medal at the 2002 under-20s European championships.

His playing career began in the youth section of his hometown team CB Xantada. At 14 he moved to the Siglo XXI training centre in Galicia, financed by the Federación Espańola de Baloncesto where the youngsters receive both academic and basketball training. When the centre in Galicia closed in 2000 he transferred to the one in the Basque Country, more modern and better equipped. Here the young Fran grew in height and weight and won himself a move to Unicaja Malaga.

2001/02 season
With Unicaja, Fran made appearances for both the first and B teams and continued his development as a player. And the stats prove this: an average of 10.6 points and 8.9 rebounds per game. He made his debut on 24th February 2002 in an Andalus derby against CB Granada and scored 6 points and 6 rebounds in Malaga’s 80-65 victory. In the nine games he played in the ACB he accumulated 14 points and 15 rebounds.

2002/03 season
He was then loaned out to Lagun Aro Bilbao in the LEB league. Immediately on joining his new team he was involved in the playoffs and helped the Basque team make club history and gain promotion to the Silver Division. At the end of the season he returned to Unicaja and he was loaned out again, but this time to Auna Gran Canaria, of the ACB, coached by the Catalan Pedro Martínez.

2003/04 season
At Auna Gran Canaria his time on court increased dramatically and he averaged 20 minutes a game in the regular phase, playing 37 games. In the playoffs against FC Barcelona, he established himself as a rising star of the ACB. Despite losing in the fourth game of the series, he contributed an average of 19.7 points and 5.5 rebounds. He also had his first taste of international competition, the ULEB CUP. In twelve games Fran averaged 9 points and 5.3 rebounds.

2004/05 season
After his successes in the Canary Islands, Unicaja Malaga retained his services on a permanent basis and he consolidated his reputation in the league with averages of 11.1 points and 6.3 rebounds. He won the Spanish Cup against Real Madrid as well as playing a role in European competition. In the thirteen games he played with Malaga he averaged 8.5 points and 4.4 rebounds. It was the first and last official season he played for Unicaja.

2005/06 season
In the summer of 2005 he was chosen at number eleven by Orlando Magic but despite a number of offers Vázquez decided to postpone the NBA adventure and signed for Akasvayu Girona. In 38 games he averaged 8.3 points and 4.6 rebounds. Injuries and the problems of adapting to a young team prevented him from performing at his best.

2007/08 season
In his second season with Barça, firstly under Dusko Ivanovic and then Xavi Pascual, he averaged 6.3 points and rebounds per game, with a valuation of 6.7, while in the Euroleague his stats were similar, 6.7 points, 3 rebounds and a valuation of 7.5.

2008/09 season
The ACB title was a reward for the team effort but also for Fran Vázquez individually. He reached his peak as a player and with his power and maturity on court he was a key element for Xavi Pascual.

In the ACB regular phase and playoffs as well as the Euro league, Vázquez headed the ranking of blocks and was, by a wide margin, the leader with 1.65 in the ACB league, 2.11 blocks per game in the qualifiers and 1.74 in Europe. He was also one of the stats leaders in slam dunks and two- point shot percentages.

In the ACB, Fran Vázquez averaged 12 points and 6 rebounds giving him a valuation of 12.

In the Euroleague he averaged 8.7 points and 4.7 rebounds. A valuation of 11.4, notably higher than previous seasons.

2009/10 Season
The 2009/10 season saw Fran mature and consolidate his position within the team. He took the MVP in the Spanish Cup and that was a fair reward for a strong, versatile, hard working player with a great future. Fran was particularly brilliant in three of the Cup games. His dependability was key against Cajasol, Power Electronics and Real Madrid. Never showy, but always there, in both defence and attack, Fran has earned the unanimous recognition he deserves.

Fran Vázquez’s speciality are blocks and he made a total of 52 in the ACB season, including four in each of the games against Xacobeo, Asefa Estudiantes, Murcia and Granada, as well as 25 in the Euroleague, including four in the final against Olympiakos. The leader in the Euroleague tournament with a career total of 139 blocks, his personal game record is 12, which he made against Valladolid in 2006/7.

He received the recognition he deserved after his great season with Barça Regal when he was called up for the Spain team for the World Cup in Turkey.

National Team
Coached at the Siglo XXI Training Centre, he made his international debut as a cadet and two years later had broken into the junior Spain squad. Success came his way in the under-20s European championship in Vilnius 2002 (Lithuania) where he won a silver medal after being defeated in the final by Greece. Fran played an important role in the tournament and average 10 points and 6.8 rebounds per match.

He is a full Spanish international and was part of the initial call-up for the 2006 World championship in Japan. Unfortunately, injury prevented him from making the final cut.

CHARACTERISTICS
Vázquez is an agile player, physically strong when it comes to scorings baskets. He is very tall but also well coordinated, and is a useful weapon on the counterattack.

His intimidating 2 metres 9 centimetres make him a top rebounder, and he is also fiercely adept at blocking rivals. Vázquez makes tactical use of his scoring options, an area of his play that has improved remarkably in recent seasons.