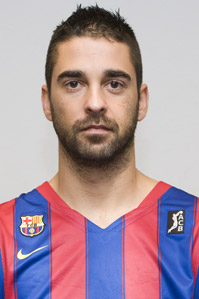 Juan Carlos la Bomba Navarro, as he has been known since he was a kid, started his basketball at CB Santfeliuenc aged just four years. He was just eight when he became an Infantil at FC Barcelona. In the 1993/94 season, his Barça team won the Championship of Spain in Andújar. It was just the first win for a generation that would remain unbeaten for three years. Two years later, now a cadet, Navarro made his debut with the state national team alongside Raül López and later his lifetime friend Pau Gasol. This was the start of a group that would create history.

Season 1997/98
There is one date that Navarro will never forget, and that was 23 November 1997. Barça coach, Joan Montes, sent La Bomba out for his first team debut against Covirán Granada and despite the nerves, he soon had the Palau Blaugrana faithful in the palm of his hand after scoring ten points in ten minutes. There was no looking back, and Navarro immediately started combining his practicing with Barça B with the first team.

2000/01 Season
In the 2000/01 season, the guard from Sant Feliu became more of a regular with the first team and was involved in the famous double. In both the ACB and the Euroleague, he managed an average 10 points. In Aíto’s last year as coach at Barça, Navarro had consolidated his role as a natural scorer.

He was named best Spanish player for January 2001 and also player of the week in week 19.

2002/03 Season
When Pesic took over the first team, in the year 2002/03, the team went from strength to strength, and won the two most important titles in Spain, the Cup and League, and also the long desired first ever Euroleague. Navarro had improved immensely, and posted 14 points on average per game.

2003/04 Season
In the 2003/04 season the team retained their League title and Navarro participated an average 30 minutes in the 48 matches in the race to the championship. He recorded his best ever percentage for free throws, nearing perfection with 142 of 160 attempts going in (89%).

2004/05 Season
Navarro was getting better as every year went by, and in the 2004/05 season he was once again under the orders of the man who had given him his first chance, Joan Montes. Barça won the Catalan League and the ACB Super Cup.

In the ACB League, Navarro was better than ever. He played 33 games in the regular season, and in 21 of those he was a starter. His percentages were as impressive as ever. The guard was one of the most treasured members of the squad and the whole League. La Bomba was twice named player of the week.

In the Euroleague Navarro was also amazingly consistent and despite his youth, remarkably mature. Juan Carlos appeared in all 20 matches that his team played, and only Dejan Bodiroga and Gregor Fucka supplied more points than he did.

2005/06 Season
In the 2005/06 Season, and just 25 years old, Navarro was one of the biggest names in the ACB League and also Europe’s premier club competition. Not only was he made best player in the ACB, but he was also best player in the Euroleague for 3-pointers, and was named in the best starting five of the competition. In the League, Navarro beat his own scoring record, 36 points against Pamesa, and was top in the Barça rankings. In Europe, Navarro was selected as best player for January and helped Barça go all the way to the Final Four.

2006/07 Season
The 2006/07 season was the last for Navarro in a Barça jersey before he left for the NBA. Navarro ended the season with an average of 17.3 points and 3.4 assists per game, with almost 18 evaluation points on average. He was by far the most important player in the team. In the Euroleague he posted an average of more than 16 points. He played more minutes than anybody in this competition, an average of almost 29. He was also way ahead of his teammates in terms of evaluation. Navarro only missed one of the 22 games his team played.

2007/08 Season
At the end of the 2006/07 season, Navarro decided his time had come for the NBA. He was to play one season for the Memphis Grizzlies. He wanted to show that he could play in the best league in the world, and certainly made it very clear that he could. Navarro soon won the fans’ favour and totted up some impressive statistics. It was enough to take him to the Rookie game in New Orleans. Navarro left his mark with 14 points in 20 minutes. Significantly, Navarro scored 156 three pointers in 82 matches and was just two short of the best score ever for an NBA rookie, which dated back to the 1996/97 season and Kerry Kittles. Rudy Fernández did beat that record in 2008/09.

2008/09 Season
But despite all that impressive stateside basketball, Navarro and his family missed the Barcelona way of life, and when an offer came in from Barça for him to come back as the franchise player as part of the new project under Joan Creus, Navarro didn’t think twice, and was headed back to his homeland.

He made an immediate impact. Not only did they win the League title, but Navarro was named MVP in the final, an award he also won in the Euroleague, the first Barça player to get that honour. Navarro was not just an explosive individualist when it mattered, but was also somebody who set the pace for teamwork.

His season was somewhat blighted by injury concerns, but Juan Carlos still played 28 minutes on average in the ACB, guaranteeing 16 points, 2 rebounds and 4 assists per game. 15 in evaluation points were collected by a man that had shown that his American experience had made him more mature than ever.

In the Euroleague, Navarro and his team once again made it into the last four, and won a historic third place. His continental campaign was almost identical to his domestic form: 28 minutes of play, 14.7 points, almost 2 rebounds, nearly 4 assists and 15.1 in evaluation points for La Bomba.

Individually he also set a series of records this season: more than 2,000 points in Europe, he beat Epi’s record for three pointers with Barça (627 from the legendary San Epifanio) making him one of the historic giants of the basketball section. Navarro, following the 2008/09 season, had played for 11 seasons in the top flight for Barça.

2009/2010 Season
The season began with two titles in two weeks – the Lliga Catalana and the ACB Super Cup. The Super Cup was won in the Canary Islands over eternal rivals Real Madrid, as Navarro led the team, winning the MVP award, to the club’s second Super Cup.

Navarro’s 108 assists in the ACB show what a generous player he is on court. With 33 league games played, “La Bomba” averaged 27 minutes on court, 15 points one rebound and three assists, with a 14 point valuation.

His high point came against Suzuki Manresa (82-87), when he notched up 25 points, took three rebounds and gave four assists. Navarro also reached 300 points in ACB finals with his 17 points against Caja Laboral.

Voted MVP in the Euroleague Final in Paris, he showed his leadership qualities with the best team on the continent and became the only current Barça player to win two Euroleague finals. His 21 points, three assists and five rebounds not only won him the MVP award, but also made him the Final Four top points scorer with 31.

National team
In the international arena, there are three big moments he will never forget. The first goes back to the year 1999, when he won the Junior World Championship with the Spanish national team and was named MVP of the competition; the second was in Japan (2006), now with the full national team. Navarro made history by forming part of the Spanish team that not only won their first medal in the World Championship, but made it gold by winning the final against Greece. Then in the Olympic Games of 2008 in Beijing, Navarro took silver after losing the grand final to the United States (107-118).

Aged 20, Navarro was first called up for duty with the national team for the trip to Australia and the Olympic Games in Sydney 2000. From then on, he has always been an automatic choice for the Spain first team. A year later he won his first medal in the form of the bronze achieved at the 2001 European Championship in Turkey.

At the World Championship in Indianapolis, and despite a famous win against the hosts, the United States, the national team went out in the quarter finals to Germany and Dirk Nowitzky. In his second European Championship, in the year 2003, in Stockholm (Sweden), the Spanish national team took silver after losing the final to Lithuania. At the Athens 2004 Olympic Games, despite winning their group, Spain had to face the United States in the second round and lost (94-102), and seventh place was all they managed in the end. At the European Championship in Serbia in 2005, Germany were semifinal victors over the Spanish national team. That edition was won by Greece and Spain only came fourth, having lost to France in the third and fourth place play off.

But 3 September 2006 deserves a special place when discussing the international merits of Juan Carlos Navarro. That day the Barça guard and eleven others made history by winning the gold medal at the World Championship in Japan 2006. They played an impeccable tournament and beat Greece in the final (47-70). Navarro scored 20 points against the Greeks in his 33 minutes on the court.

After becoming world champions, Navarro and co also felt they could win the European Champions at home in Madrid, but after performing splendidly, Russia spoiled their party by winning the final 59-60 with a Holden basket in the dying seconds.

Next came the Beijing Olympic Games 2008, where Navarro and his colleagues also had a great tournament, and made the final, but lost to the United States. Navarro had his best game against the Americans with 18 points. Bryant, James, Anthony, Kidd and co eventually came good though, winning 107-118.

But they didn’t miss out on gold in Poland. At Eurobasket 2009, despite a poor start, Navarro lifted the European Championship trophy, a first for the national team.

Others
Member of the Catalan national team and a full international for Spain.

MVP in the final of the Junior World Championship 1999 and member of the ideal five.

Second round pick in the NBA Draft in June 2002 for Washington Wizards, at number 40.

Second Catalan player to appear in the NBA All-Star game between the Rookies and the Sophomores. He scored 14 points.

MVP of the Regular season of the ACB 2005/06, and member of best five for the season.

Named, as part of the Spanish national team, winner of the Price of Asturias Award for Sport in 2006.

His two brothers, Ricardo and Justo, were the first players he faced in his childhood home.

It was coach Agustí Cuesta who started calling him la Bomba, because once he came on court, he changed everything.

Married to Vanessa and has two daughters, Lucía and Elsa.

PROFILE
Extremely talented offensive player who impresses fans with his remarkable scoring prowess. His rapid three-pointer shots and speed on approaching the hoop have brought him the nickname the Bomba, given to him by coach Agustí Cuesta when he managed the junior side.

One of Juan Carlos Navarro’s main virtues is his ability to decide when, how, where and with who he wants to play at any given time. This, combined with great technical skills and rapid execution, has made him into one of Europe’s top players.